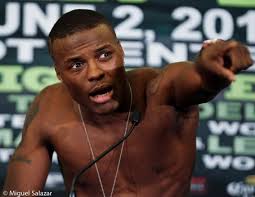 Peter Quillin dropped the bomb last week. He isn’t going to fight Matt Korobov for a career high payday of 1.4 million on a card promoted by Jay-Z’s company, Roc Nation. Instead he relinquished his WBO belt and moved on to other things. For more then a week now, the whole boxing world have been guessing what the reasons behind this decision might be. Quillin gave his answers in an exclusive interview with ThaBoxingVoice.com.

Quillin answered, “There are a lot of different reasons why the fight wasn’t made and why I dropped my belt. 2015 is going to be big for boxing and I will be part of those plans. I can’t say much more than that. There are big plans for me on the horizon. But people will have to be patient, like I needed to be patient to become a world champion. My whole life has been criticized. But every decision I make is for me and my family. And this decision is the best decision for me and my family.”

We asked Peter Quillin if those plans included a fight with the newly crowned WBA interim champion, Danny Jacbos.

Quillin corrected us right away. “That is not the interim belt he has. He is has the regular title.” But what about Gennady Golovkin, isn’t he the real WBA champion? Quillin stated, “He vacated the WBA title. Jarrod Fletcher was his mandatory, but he didn’t fight him. So he vacated his title and they made him the super champion. Golovkin isn’t the holder of the WBA belt, Danny Jacobs is.”

Peter Quillin couldn’t confirm that a fight with Danny Jacobs would be next. He was told to enjoy his life and his family. We asked Peter if he was offered more than just words, did he get paid a certain amount of money to not take the fight with Matt Korobov?

“No I don’t want to say any of those things”, Peter Quillin told us. He later continued, “A bunch of things were presented to me and I said I was on board with that. It was nothing more than a firm handshake and a good feeling. And let me tell you one thing, Al Haymon is the m*therf**king sh*t. People want to hate on him. But Floyd is the highest paid athlete in the world, mainly cause of Al. Why should I second guess that man? His track record speaks for itself.”

Even though big plans may have been presented to Peter Quillin for 2015, 1.4 million dollar is a lot of money to walk away from. And with this decision, Peter Quillin might have closed the door on Roc Nation. We asked Peter if he was concerned with that.

Peter Quillin answered, “No, because business is business. I bet you that Jay-Z has made a lot of decision that other people were unhappy with. And I am not desperate. If I was desperate, I might have taken the money. But I am good right now.

Peter Quillin also wanted to clarify a few other things. “The fight with Korobov was going to be on HBO. I am with Showtime. Would you sell out your own mom for some money? Relationships are bigger than money. And before that money would have gotten to me, it is not 1.4 million dollars anymore. I have a team of people that the money goes to. Even Golden Boy. Just because they lost the purse bid, doesn’t mean that they don’t get paid. A lot of stuff is happening behind the scenes that people just don’t understand. 2015 will be big for me, my fans just have to be patient.”