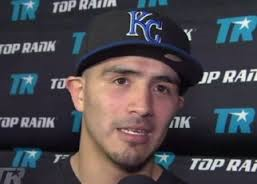 Hard hitting slugger “Bam Bam” Brandon Rios recently returned to the gym this past week after his loss last year to Manny Pacquiao last November. Rios has been relaxing and enjoying life but may return to the ring in June and has already begun his preparations and has insisted that weight is not an issue as it has been for him in the past.

“I’ve just been chilling man,” said Rios. “Relaxing. Trying to stay in shape. I’ve been in the gym for a week already. It’s not about struggling to make weight it’s just that I might fight again in June and I want to get the ring rust off.”

Fans have wondered since the Pacquiao fight whom Rios would face when he comes back to the ring and Ruslan Provodnikov was a name that was thrown out there and from what was going around the internet both of the fighters wanted the fight and was rumored to have some negotiations going on as well.

“That’s why it’s called rumors because I don’t even know what the fuck is going on. It’s rumors. I would love to fight Provodnikov.”

Another name that has been thrown out  there is Mike Alvarado whom Rios has faced twice but Alvarado has signed to fight former world champion Juan Manuel Marquez.