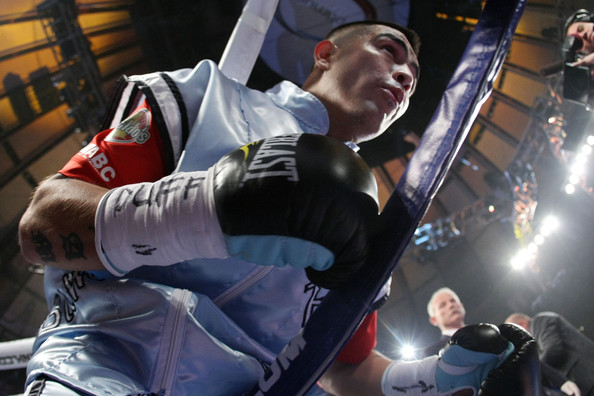 The 140 lb division is quite possibly the best division in boxing in regards to talent from top to bottom; from the Garcia’s, the Khan’s, the Matthysse’s, and the  Alvarado’s of the world, that’s just a tip of the iceberg. One of the sport’s newer stars in Brandon Rios has yet to make his debut in the division. He was supposed to make his return this month on the Donaire-Mathebula HBO card but was forced to withdraw due to a hand injury.

Rios was a recent guest of ThaBoxingVoice.com’s radio show and is excited and ready for his ring return. “I’m getting better from the injury. My arm feels better. We’re just waiting for the doctor to give the ok to get back in the gym and box but I’m still working on my strength and conditioning. But when they give my date, I’ll be ready. I’m already in shape (he’s weighing about 150), waiting for the doctors to clear me and I’ll be ready to rock and roll,” Rios told ThaBoxingVoice.com.

Rios has been itching on the sideline waiting to get his opportunity but holds a name high on his list for a potential opponent. That’s none other than newly crowned unified junior welterweight champion, Danny Garcia. As soon as he knocked out Amir Khan, Rios said, “I called Robert (Garcia) and called Cameron (Dunkin). I told them to get me the Garcia fight, get me Danny. I know I can knock him out. He’s a brawler like me but I’m a bigger stronger brawler. It’s a hard fight to make between the promoters and it might never happen, but that’s the fight I’d love.”

The 140 lb division may be stacked but a number of those fighters are under contract with the rival of Rios’ promoter Top Rank, in Golden Boy Promotions. Rios realizes this and said, “I love contract with Top Rank, why would you change what’s not broken.  But sooner or later, we’re going to have to go and make fights with Golden Boy because they have the tough 140s. But I put my trust in Cameron Dunkin. One day I’ll have to say put the bullshit aside and give the fans what they want and put on a good show.”

Most people however felt he didn’t put on a good show last time out, when he faced substitute Richard Abril in April of this year. Rios still feels he won that fight, stating, “You can’t win a fight hugging and holding. I re-watched the fight with no sound because it was the commentators that made it seem like a bad decision. It was a close fight but I still won. “

Rios also feels that the weight affected him and that he became disinterested with the fight after Gamboa pulled out. He was sluggish and weight drained but said, “They told me I had to take that fight if I wanted the (Juan Manuel) Marquez fight.  It was tough making weight and it could have affected my health. But I’m at 140 now and the Marquez fight would be the best fight to make from the Top Rank guys.”

While Golden Boy may have the depth in the division with their stable of fighters, aside from Marquez, Top Rank holds another action fighter in their stable in “Mile High” Mike Alvarado. A Rios-Alvarado fight has the makings of a fight of the year war and it’s one the fans have been foaming at the mouth for. The fans aren’t the only one excited when you mention that fight. “Oh man, give me a pen and a paper and I’ll sign it right now.  His style is like mine, two brawlers, two fan pleasing styles, the fans would love it, and it would be an epic fight,” excitedly stated Rios.

Recently on one of the recent episodes of ThaBoxingVoice.com’s radio show, Adrien Broner had mentioned Rios’ name as a guy he would want to take out through his rise up in weight and rankings. Rios obliged and repeated, “Give me and pen and a paper and I’ll sign right now.”  While Broner may be the slicker fighter, Rios feels his size will be the difference. “He hasn’t fought a big guy like me. He fought (Eloy) Perez who was smaller. He fought Ponce de Leon, who was smaller and he beat Broner. I’ll show the world if he has what it takes. He likes to come forward, with me I think he’ll put on his running shoes. I think I can beat him and I can knock him out.”

Rios has been tabbed by many as the New Margarito with the style he fights and the punches he takes. Although he appreciates the comparison because of his friendship with Tony, he says, “I’m not Margarito, I’m Brandon Rios. I do have an underrated defense that people really don’t give me credit for. Some fights I come out not bruised or cut.”

Because of the style he chooses to fight in, one might wonder how long he plans to stay in the game. Rios said, “I’ll fight till I get to 30 or so. I get hit once and a while but everyone does. My main thing is to go out and give the fans what they want.”

Should he keep giving the fans what they want, his popularity will grow more than it already is. Rios feels he’s at the star level but needs that one fight to get on the superstar level. “A fight with Marquez or even Manny Pacquiao can take me there,” said Rios.

One thing’s for sure, he has no bones about taking on the best in an already top heavy division. “You name them man and I’ll fight them. Lucas Matthysse would be a tough ass fight. I’ll knock out Garcia like I said, Broner if he wants to come up. When I come to 140, I want to come with a bang, I want a real tough mother*cker and that’s what I want.” Boxing fans will appreciate that thinking and the excitement “Bam Bam” brings whenever he’s in the ring.