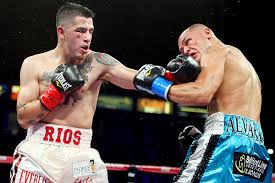 Just 10 days before they write the final chapter of their epic trilogy,  former world champions and co-stars of one this era’s most intense and exciting boxing rivalries, Denver’s “Mile High” MIKE ALVARADO and BRANDON “Bam Bam” RIOS of Oxnard, Calif.,  met with the media today at a media workout at Alvarado’s Denver-based gym.  Alvarado (34-3, 23 KOs), and Rios (32-2-1, 22 KOs), who each own a victory in the series — both of which were candidates for Fight of the Year in 2012 and 2013 — discussed the upcoming  Alvarado-Rios 3, which is scheduled for 12 rounds with the vacant World Boxing Organization (WBO) International welterweight championship on the line.  Taking place Saturday, January 24, at the 1STBANK Center, located in the Denver suburb of Broomfield, CO,  Alvarado-Rios 3 will be televised live on HBO,  beginning at 9:45 p.m. ET/PT.  The last boxing event hosted by 1STBANK Center was sold out in advance — the October 19, 2013 WBO junior welterweight world championship between Alvarado and Ruslan Provodnikov.

The telecast will open with undefeated No. 2-world-rated super middleweight contender GILBERTO “Zurdo” RAMIREZ of Mexico, facing the toughest challenge of his professional career, when he rumbles with once-beaten Top-10 contender MAXIM VLASOV from Russia, in a 10-round light heavyweight battle.

The four gladiators boast a combined record of 126-6-1 (84 KOS) — a winning percentage of 95% — with two-thirds of those victories coming by way of knockout.

Promoted by Top Rank®, in association with Zapari Boxing and Tecate, remaining tickets to the Alvarado-Rios welterweight championship, priced at $250, $200, $125, $65 and $40, tickets are available at www.AltitudeTickets.com, by phone at 866-461-6556.and at the Pepsi Center box office.

“This will be the best fight of the trilogy, as it should be.”

“I am ready for anything Mike Alvarado brings to the table.  I know all his tricks.  He can’t surprise me this time.

“No one should be surprised if this fight ends in a knockout.  It’s happened once already.  I’m not looking for the knockout but you can bet I won’t be avoiding it if the opportunity presents itself.

For both of us it’s do or die.  If I lose this fight I may just call it a day as a fighter.  I’ve been at this a long time.

“I’ve been training in Greeley for 30 days to get acclimated to the thin air.  I have been staying at a friend’s house.  He built a full gym for me in his garage.  It’s been great.

“Manny Pacquiao and Mike Alvarado are the two best fighters I have ever faced.

“I am so ready for chapter three on January 24.  This is the ending the fans have been waiting for and I promise you they will not be disappointed!”

”I feel great.  I know the kind of fight this will be.  He’s going to try to cut off the ring and when he does, he’ll open himself up and when he does that I will be cracking him.

“I will not fight his fight.  I am sticking to our plan.  But you can bet I will shoot the works when I have him in my sights.

“Brandon is right about one thing, it IS do or die for us   We are both the same person inside the ring and outside the ring.”

“I have not allowed anything to distract me from my training.  I am focused and ready.

“Fighting Brandon Rios has and continues to be an honor.  This is a trilogy fans will remember for a very long time.  We are entertainers and our fight on January 24 will be the grand finale.  I intend to start the fireworks early in the fight.”