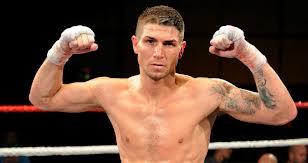 Brian Rose has vowed to prove he is ready to mix it at World level when he faces former World light middleweight champion Joachim Alcine in Betfair’s ‘The New Life of Brian’ at the Winter Gardens in Blackpool, live on Sky Sports on Saturday (April 20).

Rose and Alcine clash for the vacant WBO Inter-Continental title in front of a packed hometown for ‘The Lion’ and topping a brilliant bill in Lancashire, the Lonsdale belt holder intends to show he’s got the goods to fight for a World title.

“As far as I’m concerned I’m moving on to World level and I will be a World champion by the end of it,” said Rose. “Erick Ochieng and all the others in the top ten want to fight the British champion so I can’t blame them for calling me out and wanting to fight me, I take it as a compliment. There will be a time where I have to give it up.

“I’ll never say never to defending my British belt again, Liam ‘Beefy’ Smith was made mandatory last week which is great news for him, but that’s not a fight that I’m looking at. I’m looking at World honours, and looking to step on.

“I’ve made more sacrifices than I’ve ever made, I’ve trained harder than I’ve ever trained. I just can’t wait for Saturday. Joachim Alcine is a force at light middleweight and I want him to be at his best on Saturday. The fans will want that too so it’s a great fight and I want it so I can show how good I am and can be in the future.”

Alcine claimed the WBA belt in July 2007 and the Haitian-born Canadian believes a win on Saturday will put him back in the hunt for further World honours after stepping back down to light middleweight following a defeat to World title contender Matthew Macklin.

“160lbs is not my weight, I’m a real danger man at 154,” said Alcine. “I can be a World Champion at light middleweight and that starts on Saturday against Brian. I don’t underestimate him but I also know little about him as I know that if I go about my business properly, I’ll get the job done.”