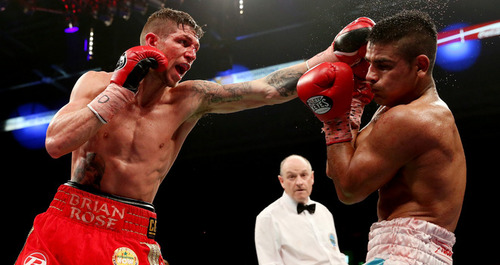 Ahh, that sweet element of surprise in a fight; the sinking realization that pulses within a fighters soul, when it dawns upon them the task at hand, is a little more challenging than expected.

I say this while pondering upon the validity of the claims from a confident Demitrius Andrade (20 (13) -0). The 26 year old WBO light middleweight champion of the world is gazing toward the stars, looking directly through more experienced Blackpool’s Brian Rose, in a manner slightly dismissive, which of course can come hand in hand when youth, confidence and skill are present.

It is with this in mind, Rose has to tear this belt from young Andrade in a fashion tantamount to a mugging. Rose’s last two fights present an incomplete picture to he who would view them as a fight plan foundation. It’s only those who have been following Rose from the early days to the present, who can construct a more complete argument for Rose in this one. In other words, his fans respect what Brian can achieve, more than those who know little of him.

Brian Rose (25 (7) -1 -1) has more heart than a butchers shop and performs to a fight plan, arguably more so, than any other Boxer from these shores. I’ve been following Rose for a while, and have noted, in particular that the closer an opponent edges to unseating him, the deeper within he delves. Of the many fighters who proclaim they would walk through the very fires of hell in pursuit of victory, Brian Rose is one of the few I’m utterly convinced would do so.

So, Rhode Island’s Andrade, what of him? In an unfortunate turn of events for Rose, Andrade is a very classy fighter. He has a natural rhythm to his fighting that is difficult to time, and awkward to predict.

His brightly shining set of southpaw skills, are made all the more intriguing as they are on occasions muddled with clear lapses in concentration and over reaching technique, peppered with a defence that appears at times confused when the fighting becomes close. However, any deficiencies that the sharper eye may witness a brief snap shot of, are rendered irrelevant after any said punches are taken, because he is then back on the attack again, looking impressive while doing so.

Demitrius Andrade strikes me as a potential star in the making, one who is short of a good four or five fights. This is why Brian Rose must employ the sneak attack while he is essentially being overlooked. Rose is expected to lose, due to many in the wider Boxing world not actually being aware of him. This includes a lack of appreciation toward his persistent ramrod jab; Fort Knox-esque high guard defence and meticulous straight leads. These said straight leads that could cause an embarrassed smile to write across the features of Andrade, as jabs intrude his head space early, again, the sneak attack.

Further attempts to pry open the guard, or encourage his opponent Rose, to break out of that shell and participate in a slightly cumbersome brawl fest should fail. As noted earlier, Rose more than others, rehearses; absorbs; and studies the game plan from under rated trainer Bobby Rimmer more than others. It’s at this point, when Andrade doesn’t provoke the responses expected from his opponent, when his opponent can use the correctly selected tools to break in, unexpected.

Some fair judges; a consistent Jab to frustrate and annoy Andrade; a performance above and beyond what Team Andrade are prepared for, or even expecting. An understanding that Andrade can get hit, dropped and has arguably arrived at his throne a little too early, plus…

An Andrade who is away with the fairies dreaming of the stars before he’s even got past what’s in front of him. Finally mix in a clean conserved offense, which is precisely what Rose is all about and I don’t see why it’s so far fetched to envisage Brian Rose dropping to his knees in exhausted praise after those words “and the new” are heard from the MC.

That’s a lot to hope for though, granted…

The early onslaught as I noted in my breakdown for this fight here, will be tremendous from Andrade. He has an extremely confident style, and I am convinced, he will go for the knockout early. Both fighters have had very long layoffs, over half a year; it’s Andrade who I would tag as a little more impatient, keen to impress and to come charging out the gates, with Power.

The first four rounds will be crucial for Rose. After which, he can come up for air, and begin chopping away, methodically, with the left hooks to the body spliced with a dash of cutting lead or straight rights spring boarded via that jab. Nothing is guaranteed in Boxing, and that includes the promise that Andrade will sail to a win without breaking a sweat. Upsets do happen in Boxing believe it or not. Especially upsets that include a fighter who is more experienced and arguably tougher than the favourite.

Yes, upsets are possible. Let’s see if we get one on the 14th of June, in Brooklyn New york. I’m picking we will.

Brian Rose, now is the time.