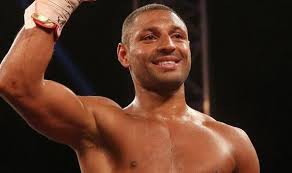 Kell Brook will be an interested observer for this weekend’s Amir Khan-Devon Alexander card. Ever since before winning the IBF welterweight title, Brook has campaigned for a fight with Amir Khan which in England could fill up a soccer stadium. Brook is hoping Khan can get a victory to make the fight between them relevant.

“It will be a close fight but I think Amir Khan will scrape through [against Alexander],” Brook told ESPN. “I think there will be a bit of drama at some point in the fight but Amir has more of a boxing brain and definitely more speed than Devon. “I hope he keeps his hands up against Alexander and doesn’t get chinned again. It would mess things up a bit if that happened. We need to bubble wrap Amir Khan ideally.”

Should Khan win, Brook feels he shouldn’t get a crack at Floyd Mayweather especially because Brook feels Khan can earn more money fighting him then Mayweather.

“He wants to fight Mayweather and when he loses he’s got a big bag of dosh and then there’s still the fight with me that he will get well paid for. But that’s not how it should work,” explained Brook. “He says he wants the big fights but he’s not even the best in Britain, I am, and he could earn more money fighting me than Mayweather. I don’t see why he’s banging on about the Mayweather fight when there’s a bigger fight in his backyard. He doesn’t deserve to be fighting Mayweather, or me for that matter, but I just want to get rid of him.”