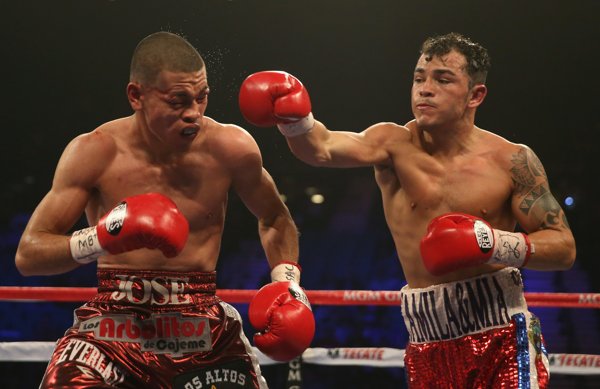 In the opening bout of the Pacquiao vs. Bradley II pay-per-view broadcast, Bryan Vasquez (33-1, 17 knockouts) took on Jose Felix, Jr. (26-0-1, 21 knockouts) in a 12-round junior lightweight contest. Ahead of the broadcast many criticized Top Rank Promotions for putting together a rather shallow main card ahead of the main event, but although it was predictable it managed to be much more exciting than anyone had originally anticipated.

Going into the bout, much of the talk surrounded the notion of Felix being a heavy-handed fighter, and Vasquez’ last loss came by way of knockout. In fan’s (and maybe even Felix’s) mind(s), this bout was guaranteed to end in a violent manner. Instead, Vasquez managed to not only silence initial speculation of his “weak chin”, but also served his opponent a boxing lesson to remember.

From the onset, both fighters came out aggressive, but Vasquez was the one who was both busy and effective. With superior technique, footwork, and defense Vasquez was able to outwork his opponent seemingly at will. Still, things weren’t easy for Vasquez considering that Felix seemed to grow more dangerous as frustration levels continued to rise. It was this frustration that led to Felix eventually losing his composure and firing off a pair of low blows, and a knee to Vasquez’ groin towards the end of the fight.

Felix’ biggest problem however seemed to be the fact that he got caught up in his own hype. With his last three victories coming by way of knockout, Felix was determined to end his bout with Vasquez in a similar manner. This focus on heavy handed shots only made Felix an easier target for his opponent, and by the end of the bout it was Vasquez who hand landed the most overall and power punches between the two of them. To his credit, Felix made a great use of a jab, but it was clear that the newfound hype and focus on his career affected his performance and denied him a win.

The judges ultimately awarded the decision victory to Bryan Vasquez on scores of (117-110), (114-113), and (114-113). It’s a bout that many at home scored as a much clearer win for Vasquez, but the judges scorecards just go to show how Vasquez was to getting denied his rightful victory.