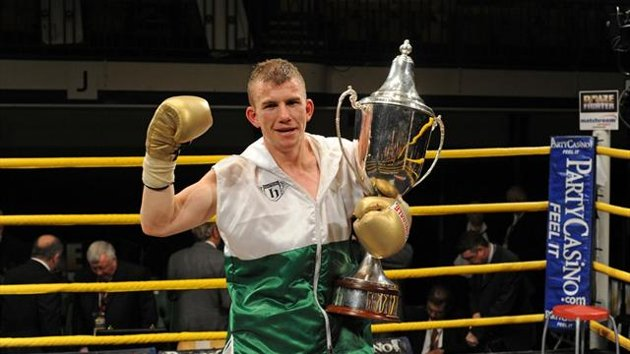 Gary Buckland says a move up to Lightweight will bring the best out of him as he faces Gavin Rees in a British title eliminator on Saturday night (February 1) at the Motorpoint Arena in Cardiff, live on Sky Sports.

Buckland is back in action for the first time since August when he had the chance to win the Lonsdale belt outright in his British Super Featherweight title defence against Stephen Smith at the same venue. Smith stunned Buckland by uncorking a devilish uppercut to end their contest in the fifth round and the Welshman is honest in his assessment of that defeat whilst insisting he’ll be a major force up at Lightweight.

“I don’t want to make excuses about the Stephen Smith fight, I lost fair and square,” said Buckland. “The only thing I can put it down to was other things going on in my life during my training camp. I was distracted big time and that showed in the fight.

“A win over Gavin would get be back to British title level. I thought I would be on some small hall shows, which I would struggle to get up for. So when I was offered Gavin Rees I thought ‘what a fight to get me back up’. If I beat Gavin I will be back in with a shot at a big title.

“At Lightweight I will be a bit stronger but I am happy to box at either weight, whatever my options. After Saturday’s fight we will sit down and look at the options but I’ll be a different beast at the higher weight.

“A fighter doesn’t know what he has left until he’s in there again. I know I made mistakes before Smith, I know there were things on my mind, for this fight I’ve worked very hard for five weeks and done everything right this time.

“In all my defeats I’ve come back stronger than ever and I’m hoping this will be the same starting with the Rees fight.”

Rees too endured a disappointing 2013, with a World title challenge defeat against Adrien Broner in February followed by a slender loss to Anthony Crolla in Bolton in July. The 33 year old still harbours strong ambitions to become a two-weight World champion with some big domestic battles on the horizon, and although Rees admitted that defeat on Saturday could spell the end of his career Buckland is expecting a hard battle with his fellow countryman.

“This will be a really tough fight,” said Buckland. “Gavin Rees is one of the strongest opponents I have ever faced. I wouldn’t say the strongest but certainly one of – he is up there with Gary Sykes, Stephen Smith, so I will need to be careful.

“You have to be careful whichever boxer you get in with and when I was offered Gavin Rees it was the sort of fight I can easily get up for.

“I am expecting the best of Gavin Rees. Everybody wants to see a toe-to-toe war between me and him but I expect he will box well as well. The two of us can do a bit of boxing and I think that is going to happen.

“I think the Crolla fight was one Gavin probably thought he was winning but I certainly didn’t think so – I thought Crolla was a couple of rounds up.

“When you look at it you question does he need to carry on – he is a former World, European, British champion, he has won everything. But he seems to keep doing well and carrying on so you have to give him great credit for that.”

Rees’ mouth-watering clash with Buckland is part of a great line-up of action in Matchroom Sport’s first boxing show of 2014.