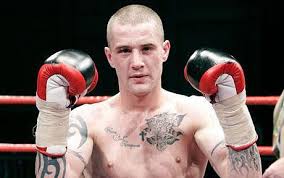 Ricky Burns and Brian Rose are back in action on Saturday night and determined to bounce back from defeats in style as they box at the First Direct Arena in Leeds on Saturday night, live on Sky Sports in association with Grosvenor Casinos.

Both fighters enter new dawns on Saturday night, with the Scot moving up to Light Welterweight and the Blackpool man hunting a return to World title action.
Burns endured a tough end to life at Lightweight, breaking his jaw in a draw against Raymundo Beltran in his September 2013 defence before losing his WBO crown to the brilliant Terence Crawford in March.

Dejan Zlaticanin travelled to Glasgow in June to face Burns for the vacant WBCF International belt, but the Scot hit the deck in the opening moments of the clash and ended up on the wrong side of a split decision.

The 31 year old made the decision to move up in weight after the Zlaticanin defeat – a loss Burns said he felt more than the Crawford one.
“The Zlaticanin fight was a more crushing defeat than actually losing my World title,” said Burns. “I should have been punching holes in him. When I look back at it, I was really, really struggling to get the weight off, it just wasn’t budging and it did affect my performance. During the fight I knew what was happening but I couldn’t get out of the way of his shots, he was looking for the big overhand left hooks and every time he threw it I knew it was coming but I couldn’t evade them. Trying to boil myself down to 9st 9lbs was just draining the energy out of me so fingers crossed that up here it’s a new start.”

Rose went to New York to challenge Demetrius Andrade for the WBO Light Middleweight title in June, succumbing to the unbeaten Rhode Island talent in the seventh round.
“Tonight is now the biggest fight of my career,” said Rose. “I need to comeback in style, it’s not just about winning but about performing and coming back with a bang. I don’t want to just scrape a win I want to show that I belong at the top of my own bills in front of my own sell-out crowds and boxing in America, so it starts here with a good performance and a win, getting a few titles and another World title shot.

“On the night and the day after, I was devastated. But I came home and had time with my family and that’s always a big lift, family is always there for me and it put things into perspective for me, it made me realise that there’s more to life than just boxing. I’d sacrificed so much to get to the World title shot, and don’t get me wrong, the hunger is still there, but family came first for the five or six weeks I had off.”

Burns and Rose are on a great undercard in Leeds supporting local star Josh Warrington who is looking to add the vacant European Featherweight title to his British and Commonwealth belts against Italian Davide Diele.