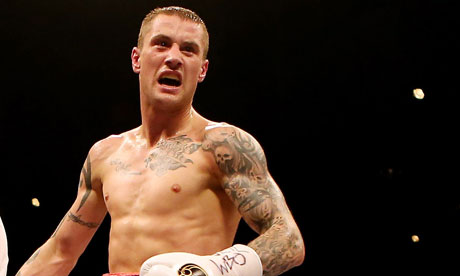 Ricky Burns believes he can become a World champion again by the end of the year as he takes on Dejan Zlaticanin for the WBC International Lightweight title at the Braehead Arena in Glasgow on Friday night, live on Sky Sports.
Burns meets the unbeaten Montenegrin in an eliminator for the World title and the Scot is keen to get right back on the World title trail after losing is WBO crown to Terence Crawford in March.
The 31 year old has never fought for the coveted green of the WBC, and while his focus is on Zlaticanin, he says a good performance can land him a shot at Figueroa, a champion he believes he could beat.
“Eddie said that I need to come through this first but if I do then he’ll be pushing for me to fight Figueroa,” said Burns. “I believe I have another World title in me. Omar is a good fighter, another southpaw, but I’ve seen clips of him and his last defence was a close fight and some people thought he lost it. So it would be a fight that I would be confident going into and the WBC belt is the one that everyone wants to get their hands on, so fingers crossed that I can get through this one and Eddie can work his magic and get me that shot.
“A lot of people have said to me are you moving up to Light Welterweight but 100 per cent I am staying at Lightweight, there are some huge fights out there for me at the weight, the rematches with Beltran and Crawford are big ones, there’s Miguel Vasquez and there’s some great British fights too. I make Light Welterweight to easy and I think that if you are making the weight too easy you are at the wrong weight. That last couple of pounds to get to Lightweight is not fun, but I am a Lightweight and I’m not going to be moving.
“I haven’t watched any footage of Dejan. I know he’s undefeated in 18 fights with 13 KOs but I don’t think he’s boxed outside his hometown so you don’t really know the level of opponents he’s facing.
“I never put more pressure on myself than I need to, as long as I get the win, that’s all that matters. Is Friday a must-win fight? Yes, I suppose so, but that puts more pressure on and when you go in there looking for the big punches to look good it doesn’t happen. I am just going into this fight and looking to stick to my boxing and if I have got to him and hurt him I will be looking to close the show, but as long as I win that’s the main thing.
“I think you will see a different Ricky Burns in the ring. I am happier in the gym, I am in with a great bunch of lads and I’ve really enjoyed the camp so I think that will show on Friday.”
Burns’ clash with Zlaticanin is part of a huge night of action in Glasgow as Willie Limond defends his Commonwealth title against Curtis Woodhouse who puts his British crown on the line in the process.
Cruiserweight rivals Stephen Simmons and Wadi Camacho are set for their grudge match with the Edinburgh man’s WBC International Silver belt on the line, Jon Slowey faces Kris Hughes for the vacant Celtic Featherweight title, unbeaten Lightweight star Scotty Cardle is set for a step-up fight and there is action for unbeaten Scottish talents David Brophy and Michael Roberts.
Tweet