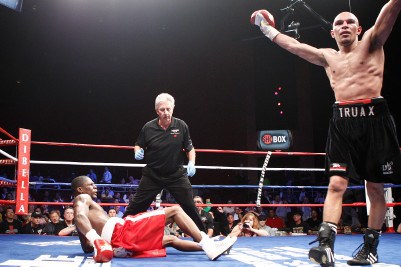 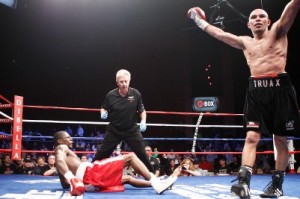 This week Thaboxingvoice.com spoke with Caleb ‘Golden’ Truax. The 30-year old middleweight is coming off an unanimous decision victory over Derick Ennis, on ESPN last month. We discussed the upcoming fight between Sam Soliman and Jermaine Taylor, his future and his signing with Al Haymon.

”I was kinda dumbfounded,” said  Truax reflecting on the moment he found out that Jermaine Taylor was going to get a title shot against Sam Soliman. He continued, “I can’t really speak on the brain bleeding thing. He is cleared by the commission, so I guess he is healthy, but he hasn’t done anything to deserve it.” The fighter told us that he isn’t really sure about the outcome of the fight. “It’s hard to judge. Jermaine Taylor does have a very good jab, but Soliman is very active and tough and he just beat Felix Sturm. If I have to chose, I will have to go with Sam Soliman.

Caleb Truab and Jermaine Taylor fought each other in April 2012. ”It was my first big fight, I was kinda starstruck,” Truab admitted. But he feels that, if he ever get’s a chance to rematch Jermaine Taylor, he is going to be victorious and that chance has become very likely since the fighter from Minnesota signed with Al Haymon. “They actually already contacted my team,” he told us. “They asked us if I wanted that rematch, when Jermaine Taylor becomes world champion. I would love that fight. I would love to erase that blemish off my record.”

About signing with Al Haymon, Caleb Truax explained to us, “We had our concerns about the inactivity of Al Haymon fighters. He has so many fighters and not so many TV dates, but I have a big following in Minnesota. I sell a lot of tickets here. They told me that they won’t have a problem with me fighting an off TV, stay busy fight back at home with Warriors Boxing Promotions.”

The upside of signing with Al Haymon is clear. He is now in line to fight some of the middleweight champions that are in the stable of the mysterious boxing advisor. Truab told thaboxingvoice.com that if Jermaine Taylor beats Sam Soliman, he wants to fight Jermaine Taylor again, and if not, he wants to fight Peter Quillin. ”Peter is a good, solid fighter, but I feel that there are some defensive flaws in his game that I can take advantage off.”