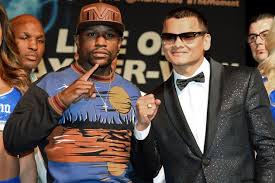 Marcos “El Chino” Maidana, the former welterweight world champion who gets his highly anticipated rematch with Floyd “Money” Mayweather in the main event of “MAYHEM: Mayweather vs. Maidana 2” on Saturday, Sept. 13 live on SHOWTIME PPV®, met with media members in Carson, Calif., last Saturday at StubHub Center and tookpart in an interview on the SHOWTIME CHAMPIONSHIP BOXING telecast.

Undefeated 11-time world champion and perennial pound-for-pound kingpin, Mayweather (46-0, 26 KOs) was, of course, the main topic of the questions directed at Maidana (35-4, 32 KOs) on Saturday.

“He’s not as good as people think,” Maidana told the dozens of reporters in attendance at StubHub Center. “I was able to pin him to the ropes and land punches, so he’s not as difficult or as invincible as people think. He’s hittable. You can land on him. I made mistakes. I was a little too anxious. He never hurt me, but he’s got a respectable punch. You’ve got to respect him.”

Below is more of what Maidana, Santa Cruz and Angulo said during the media roundtable:

Did you get tired in the first fight?

“Yes. I did. I came out strong the first six or seven rounds, and after that I had to take a break and catch my breath a little bit. I had to pace myself. I have to not get as anxious for this fight.”

Are you training any differently for this fight?

“No. No big changes. Just working on my distance control and a couple other minor changes.”

Does your conditioning need to be better this time around?

“I’ve had a little more time to prepare for this fight so this time I’m going to be ready.”

Have you studied the last fight? And what could you do better?

“Yes. Minor changes, but not too much else.

“I’m always looking for the knockout. And if I can’t (get it), I’m going to win by decision.”

How has your life changed since the first fight?

“It’s changed. But I’ve had big fights before. The Amir Khan fight; the (Adrien) Broner fight. But this fight is bigger than those. So it’s changed.

“I never thought that he would give me the rematch. But when he decided to, I was surprised.”

Are rematches harder or easier?

“This is the first time in my career that I’m doing a rematch. It can be a little bit of both. You can argue that it can be hard, but at the same time we know each other so it can be easier.

“I fight for glory. Obviously, my future is secure. But part of me fighting still is because I want to win. And I want to beat Mayweather.”

“I’m excited and I’m hungry. It’s been like five months since I’ve been in the ring. I’m just ready to go out there and do what I do and give the fans a great fight.”

On facing his next opponent, former sparring partner Manuel Roman:

“We used to spar a lot and he has good technique, but not a lot of people know him. He’s a good friend, but this is business. Once we’re up there we have go out there and give it our best.”

What are some of the things that you feel you need to improve on as a fighter?

“Everything. There are a lot of things we have to improve on. We’re trying to get different experiences, like fighting with people who move a lot. Every time we’re in the gym there are little things we need to learn. As my father says, ‘You never stop learning.’ I’ve learned a little from every fight.”

Do you plan to fight at 126 pounds next?

Who is the one guy you want to fight?

“Guillermo (Rigondeaux). He’s the one who’s been calling me out saying that I’m scared. I want to prove that I’m not scared. I know it’s a hard fight for me, but we don’t care. I want to give the fans what they want. I want to please them and if they’re happy, I’m happy.”

What do you think about your power at 160 pounds?

What do you think about facing James De La Rosa?

“I honestly don’t focus on my opponent. I focus on the work I have to do. Virgil (trainer Virgil Hunter) grades them and tells me what I need to do.”