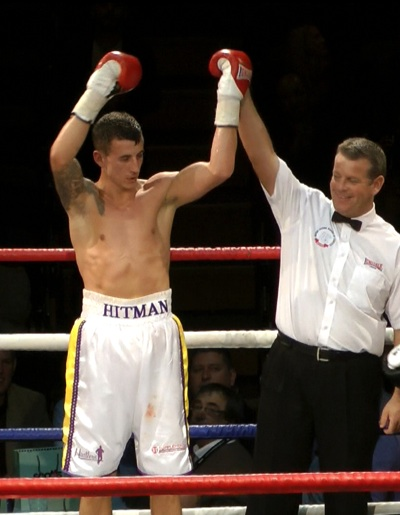 London (30 April) Callum Hancock is feeling “absolutely brilliant” and “over the moon” to be back in action on May 10 at Ponds Forge Arena, Sheffield.

The Sheffielder known as ‘Hitman’, who was out of action for 11 months due to injury, fights for the second time this year on the undercard to Kid Galahad‘s fight for the vacant Commonwealth title, live on Channel 5.

“I can’t wait for May 10th, back in Sheffield in my home town and boxing on a big Channel 5 show like this is every young fighter’s dream – it’s massive.”

In his last contest in March he overcome Steve Spence over four rounds and admits that it was the biggest performance of his career so far, as he returned to fighting after recovering from serious whiplash injuries sustained in a car accident that left him unable to fight for almost a year.

“It was a long time coming to get back in the ring following my accident, it meant everything to me,” Callum said.

“It was massive for me, I was absolutely petrified before my last fight, I was scared stiff and I’ve never felt like that before.

“I kept doubting myself – am I ready? Should I be doing this? Is it too soon? And I answered all the questions to myself which I was over the moon to do.

“In my training I was worried about doing something to my neck but this time I’ve been flying, so all systems are go for May 10th.

“In this game confidence is key, if you go in that ring doubting yourself, that’s it, game over – the demons have definitely been shrugged off the shoulders, I’m back and I’m happy.”