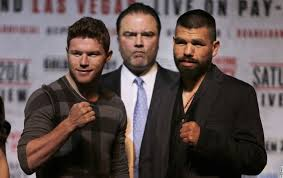 On Saturday night, Golden Boy Promotions returns to PPV from the MGM Grand in Las Vegas, as 2 of the more well-known junior middleweights in the world will enter the ring in the event named “Toe to Toe”. Saul “Canelo” Alvarez will be having his 1st bout back in the ring since the pretty once-sided fight against Floyd “Money” Mayweather fight in September. He will be stepping into the ring against “El Perro” Alfredo Angulo, in a fight that will be very telling as to the future of not only Canelo, but also the future of the spot.

The only 23 year old Canelo Alvarez comes into the fight with a record of 42-1-1 with 30 KOs. He finally received his 1st loss of his career in September against Mayweather and now he looks to show what he learned in that fight where, even though there was 1 card at 114-114, it was a boxing clinic by Mayweather. The very popular red-headed Mexican didn’t lose much if any fans from that bout and may have actually gained fans by his humbleness after the defeat. He still has a very bright future in the sport and now that he has been somewhat knocked off a pedestal, it seems to have made him more likable.

Alfredo Angulo will be stepping into the ring with a record of 22-3 with 18 KOs. The 31 year old veteran Mexican fighter is also coming off a loss as he was stopped in the 10th round by Erislandy Lara in California last June. He was able to knockdown Lara in both the 4th and 9th rounds, but in doing that, he tried to withstand an assault of cumulative punches by Lara that resulted in significant hematoma over the left eye of Angulo. During the 10th round Angulo actually turned his back away from Lara walking towards the corner and as Lara moved in, the referee correctly stopped the fight.

This fight can go 1 of 2 ways in my opinion. Either Angulo, who always attacks early, will catch Canelo in the early rounds and win it within the 1st or 2nd round or Canelo will be able to hold up against the early pressure and Angulo will begin to wear down and probably get stopped late. Either way, I don’t see this fight going the distance. Both men have 2 much pop, too much motivation, and just enough lack of defense that someone is going down. The biggest question is if Angulo does catch Canelo and hurts him early, will he have the “James Kirkland-like” fortitude to recover and attack right back.

Angulo wants to prove that his career isn’t over and he wants to show that he is back, in a division that he was pretty highly ranked in 3 years ago before that Kirkland fight. Canelo wants to prove that all the hyped he received before the Mayweather fight wasn’t unworthy. He will either lose and his career could go in the direction that Chad Dawson’s has gone recently, or he can win, and show that even in a loss against Floyd, he is the future of the sport and still has just as much potential as his fans and Golden Boy Promotions felt.

I’m picking Canelo by stoppage in the 9th. I feel that he was a little over his head with the Mayweather fight, not only with skill, but also with the hoopla that surrounds a PPV fight to that magnitude. He is used to training and fighting, he never had to go through the kind of city tours and other obligations that he had to do during that fight. That experience will only help him for his future. Also, after that fight, you could see Mayweather talking to Canelo and giving him advice, and that’s definitely not a bad thing. No matter what happened in the fight, it should be entertaining and definitely 1 of those events you don’t want to miss, enjoy the fights.