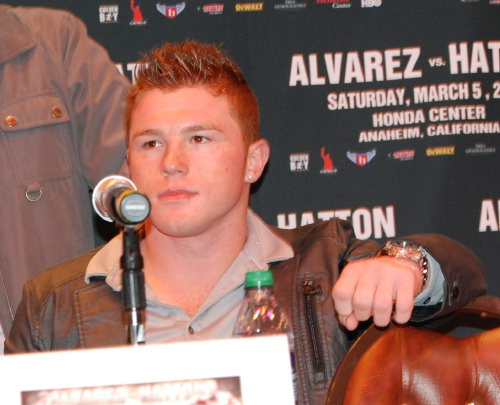 Golden Boy Promotion’s Richard Schaefer announced that a deal has been reached between WBC junior middleweight title holder, Saul “Canelo” Alvarez and WBA “regular” junior middleweight champion, Austin “No Doubt” Trout. While the bout has been rumored for weeks, it was assumed that it would take place on the undercard of Mayweather-Guerrero May 4th and it the deal didn’t get done there was still a significant chance that Canelo would end up as the co-feature against another opponent.

However, that won’t be the case and Canelo-Trout will now act as its own main event for an April 20th card that will be held at the Alamodome in San Antonio, Texas and televised on Showtime. Originally it was supposed to be Abner Mares and Daniel Ponce De Leon on the April 20th Showtime date, but now that bout has been postponed for May with the 18th as a possible scenario.

The fallout with Canelo-Trout as it relates to the Mayweather-Guerrero undercard is directly related to Canelo’s demand that Mayweather sign a guarantee to fight him in September. Mayweather did not want to look past Guerrero by signing on to fight another opponent. So Canelo felt that the best retaliation would be to deny Mayweather the potential PPV buys associated with having a Mexican star on a Cinco de Mayo card.

It definitely is a good decision for Mayweather to not overextend on his fighting commitments, especially considering he hasn’t been the most active fighter in recent years. But whether or not his decision is fueled by genuine ideals, regardless Floyd is making the right move to not look past “The Ghost.”

For Canelo, he will be able to shake off the criticism from his doubters that say he’s been protected and isn’t of the caliber that Golden Boy has suggested. The difficult thing is he will have to do it against presumably the toughest realistic opponent not named Floyd Mayweather. I give Canelo a ton of credit for stepping up and taking this very dangerous fight because a win over Trout will be difficult and it won’t give him the notoriety of a Mayweather, except for the hardcore fan.

If Trout — who is coming off of the biggest victory of his career against Miguel Cotto — wins he deserves all the credit. I’m not sure if he will land the Floyd fight, but he’d certainly deserve it.