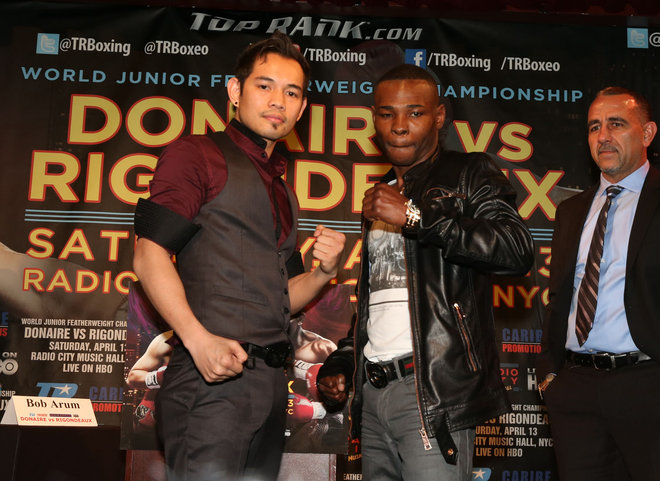 One may not notice it at first, but there will be two fights occurring on April 13th during HBO’s World Championship Boxing main-event. The first and most significant fight features a match-up of two of the super bantamweight division’s elite as Nonito Donaire takes on Cuban amateur-great, Guillermo Rigondeaux in a bout to determine who is the number one fighter in the division. The other fight of the night will occur outside the ring, except it won’t involve athleticism or strength. Instead, a battle of wits and effective game planning will be engaged between Donaire trainer, Robert Garcia, and Rigondeaux’s new recently hired trainer, Pedro Diaz. At the most recent press conference to announce the April 13th bout, Tha’ Boxing Voice caught up with both trainers as they prepare their fighters for the toughest fights of their careers so far.

One of the biggest surprises that came with the announcement of this fight was the fact that Rigondeaux has taken on Pedro Diaz as his new trainer. With Diaz’ recent work with fighters like Miguel Cotto, many were curious as to how long the professional relationship might last, and whether any significant improvements will be visible come fight time. Things already seem to be off to a good start as Diaz already seems to have some loose workings of a game plan brewing. “I think that Guillermo needs to focus on his tactics and what he’s going to do in the ring.” Diaz says, “Whatever Nonito brings to the fight is his problem, but we’re confident that the one who’ll come out the winner is Guillermo.”

As some fans continue to question just what Diaz brings to the table as far as Guillermo’s overall boxing game is concerned, others feel that this trainer/fighter relationship could be reminiscent of the days with combinations like Steward/Hearns and D’Amato/Tyson. Regardless of what the future may hold for the union, Diaz seems excited at the opportunity. “From what I’ve seen, [Donaire’s] a great competitor. After all, he was recognized as the best fighter of 2012. With that said, it’s going to be a great fight.”

With all the surrounding hype surrounding Rigondeaux’s newest in-camp acquisition, Garcia remains unfazed.”I read that he (Guillermo) [hired Diaz], but it’s just another challenge. I love challenges, and Diaz has done a great job with previous fighters. It’s a challenge for me too. I just think Nonito’s skills and power will be too much for Guillermo Rigondeaux. Everybody might think that I’m wrong, but I think this fight might turn out to be an easy fight for Nonito. As long as Nonito keeps his cool, keeps his patience, and follows his game plan I don’t think he has any problems against Guillermo Rigondeaux.”

With the countless online debates that have sparked since the announcement of this fight, fans have focused their argument on three main points: 1.) Experience 2.) Boxing style 3.) Punching power.

In the debate of experience, the side you choose is based on which stat one finds more convincing. In Donaire, you have a young, surging fighter who has amassed a 31-1 record, with victories over decorated veterans and celebrated world champions. Rigondeaux is much different. When looking at his record, the first thing that jumps out is the fact that his professional record is a very green 11-0. When further researching the fighter however, you find that he spent most of his years in the amateur ranks, amassing a 377-12 record which in some circles has him often described as a living legend.

As impressive as Rigondeaux’s amateur record may be, the question still remains as to how it will translate to the professional style of fighting. In some fights he has shown near technical perfection while showcasing his killer instinct in spectacular knockout victories, but in other he has seemed content to just stay on the outside and win a jab contest in an effort to win points. This leads to the question of just which version of Rigondeaux will show up on April 13th? How would one even prepare for a fight that could go to being an exciting back-and-forth fight one second, only to have it turn to a boring chess match the next?”

“Well, he might be able to do it for two or three rounds,”  says Garcia, ” In three-hundred seventy-seven amateur fights, he only fought for 3 rounds each fight. Once you get into the later rounds and you have a puncher like Nonito in front of you it’ll be a different story. He’s never been in the ring with someone like Nonito, honestly. We’ve got to see the facts, and Nonito has been in the ring with fighters as good, even better, or more experienced at least than Rigondeaux in the pros. But Rigo is going to try his best, and I wish him the best. Honestly, I respect his career as an amateur, and as a pro too because having to leave his country, and leave family behind to find a better life for himself and for his family you’ve got to respect that, and I got to take my hat off to him. I have nothing but respect for him, but inside the ring it’s going to be him and Nonito, and Nonito’s going to do his job.”

Diaz was much more subtle in his response to the proposed game plan to  use against the Filipino fighter. “We’re just going to work on winning all 12-rounds, and make sure that Guillermo gets the win.”

A big focus has also been placed on Rigondeaux’s last fight against Robert Marroquin from back in September. In a fight where Rigondeaux was expected to steamroll through his opponent, the Cuban was visibly staggered by a couple shots thrown by the challenger. Although Rigondeaux would go on to win the fight, questions arose about the champions chin after being so affected by the fairly light-punching Marroquin. Against the hard-hitting Donaire, this topic of concern is constantly brought up by both fans and the media alike, leading to arguments and constant questions as to whether Rigondeaux can stand up to the ferocious Filipino’s punches. “That’s nothing to worry about.”, said Diaz, “We know that we’re going into a fight with a quality fighter, but just like Donaire, Guillermo can take over a fight with his own punching power. So Donaire will definitely find out about Guillermo’s power.”

Once again, Garcia remained unfazed, confident, focused on the task at hand as talks continued of Rigondeaux’s past fight with Marroquin. “It’s going to be Nonito and Guillermo in the ring so we could watch the fights over and over, but it doesn’t really mean anything.  In the ring it’s not going to be Marroquin, it’s going to be Nonito. It’s just a different level, and people will see [that]. Rigondeaux is very talented. He’s got so much talent, so much skills, that when he’s in front of someone like Nonito it’s going to be a different story. He’s never been in that situation before, and once he gets hit by Nonito don’t expect him to last that long.”

Regardless of where one may stand in the debate of who wins between Donaire and Rigondeaux, it’d be wrong to ignore the fact that the victor will be determined by either a knockout or superior game planning. With this kind of shared pressure on both fighters and trainers, April 13th is shaping up to harbor one of the most technically exciting fights in recent memory. In a new year that has already been ravaged by the dreaded “injury bug”, here’s to hoping everything is smooth sailing from this point forward as both fighters look to engage in what may open up the next chapter of their careers.