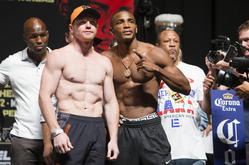 Saturday night live on Showtime PPV (9PM ET/ 6PM PT) from the MGM Grand Garden Arena in Las Vegas, NV. one of the most anticipated showdowns of the year has finally arrived as reigning WBA super welterweight champion Erislandy “The American Dream” Lara (19-1-2, 12KO) squares off against rising Mexican superstar and former world champion Saul “Canelo” Alvarez (43-1-1, 31KO) at a catch-weight of 155lbs in the 12-round main event. The co-main event of the evening features the return of former world champion Abner Mares (26-1-1, 14KO) taking on battle tested Jonathan Oquendo (24-3, 16KO) in a 10-round featherweight bout. Also rising super featherweight contender Francisco Vargas (19-0-1, 13KO) takes another step up in class taking on former world champion Juan Manuel Lopez (34-3, 31KO) in a 10-round bout for NABF/WBO International super featherweight titles. Opening up the PPV telecast interim WBA junior welterweight titlist Johan Perez (19-1-1, 13KO) makes the second defense of his title against the always tough Mauricio “El Maestro” Herrera (20-4, 7KO) in a 12-round bout.

The 31-year old Cuban southpaw has made a seamless transition to the professional ranks after a lengthy successful amateur career with the Cuban national team. Lara decided to relocate from Florida to the lone star state of Houston,Tx., early in his career while hooking up with trainer Ronny Shields who seemed to put the finishing touches on the polished gem. Lara earned his stripes early on his career being unprotected fighting the top competition in the junior middleweight division such as Carlos Molina (D), Paul Williams (L MD), Alfredo Angulo (TKO10) and most recently Austin Trout (UD) in dominating fashion to pick up the WBA super welterweight title. The talent Lara possesses from the southpaw stance has been both a gift and a curse as many big names have avoided the Cuban as being a high risk low reward opportunity. Lara has gone leaps and bounds to try and shake the stigma of not being the most exciting fighter to watch which was latched on to him by many boxing pundits. Coming from the Cuban school of boxing, Lara’s conditioning, mobility and accuracy is on par with some in the best clinical boxers in the game like fellow Cuban star Guillermo Rigondeaux and pound for pound king Floyd Mayweather. Coming off the lopsided victory over Trout scoring two knockdowns last December, Lara demonstrated his punching power is at the top with anyone in the division. Stepping between the ropes Saturday night Lara will be facing a younger, bigger, stronger test in Alvarez which is a much different task than the slower Angulo and cagey veteran in Trout. The chin of Lara has been susceptible in the past versus Angulo along with his leaky defense which could make an interesting turn of events if Alvarez can take advantage landing the big power shots. Lara remains unfazed by the demanded “catch-weight” issues and star power of Canelo leading up to Saturday night, “Every fighter I’ve fought has been heavier than me and I’ve been able to deal with them, so we’re not worried about Canelo’s size. Everyone goes into the ring how they feel comfortable. I’m not worried about his weight on fight day.”

Canelo Alvarez steps into the ring Saturday night somewhat a veteran with 45 fights under his belt at the remarkable age of 23. Alvarez was carefully matched by his handlers throughout his young career in an effort to create the next Mexican star replacing the great Julio Cesar Chavez which bolted plenty of criticism yet Canelo passed every test with flying colors including a narrow victory over Austin Trout. Alvarez decided to take that jump to the big time last September in what was officially his first true test of his career versus Floyd Mayweather. Canelo failed miserably executing the wrong game plan trying to outbox an old fox like Mayweather which ended up being his downfall.  Alvarez rejuvenated himself last March totally outclassing the tough durable Alfredo Angulo stopping him in round ten. Alvarez showed a different arsenal using his hand speed being aggressive and pushing Angulo back which impressed many critics. Canelo will have to employ the same type of strategy Saturday night yet does he have the useful mind to make the correct adjustments along the way against a heady fighter like Lara? Alvarez does hold the key equalizer in the fight which is his power. Alvarez demanded a “catchweight” of 155lbs which brings into question, has he simply grown out of the division or the new rockstar status where he feels entitled to call the shots. Alvarez conditioning and the ability to stay active throwing combinations throughout the round will play a key factor as he is known to fade late in the championship rounds where Lara picks up steam and gets better as the rounds progress. Alvarez understands Lara is one of the best in the world and is up for the challenge, “Without a doubt this is one of the best opponents I’ll ever have. But I’m always going to look for tough opponents, tough rivals. I want to fight the best.”

There are so many different ways this fight can develop which makes it an excellent 50/50 fight. Lara has made it clear that he remains loyal to the guidance of powerful adviser Al Haymon while Canelo has the backing of Golden Boy Promotions Oscar De La Hoya which is interesting to note if indeed this fight goes to the judges scorecards. Saturday night looks to be the mix of hardcore boxing fans in Lara’s corner along with the huge cult following of Canelo which should come together for what is expected to be a fascinating night of boxing.