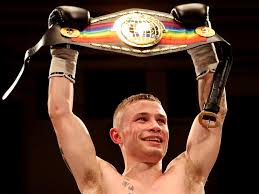 Also featured in televised action is heavyweight star Chris “The Nightmare” Arreola (36-4, 31 KOs), who will be returning to the ring for the first time since March.

“It’s an honor to be making my U.S. debut on CBS,” said Frampton. “I’ve accomplished a lot in my career and I’m looking forward to even more success starting July 18. It’s going to be a great afternoon for all of the fight fans watching.”

“I’m thrilled to be fighting Carl Frampton in El Paso, Texas, and I promise I will leave everything in the ring,” said Gonzalez Jr. “I know there will be lots of Mexican fans there supporting me and my plan is to fight hard and take away Frampton’s perfect record.”

“I can’t wait to get back in the ring and show my skills on CBS,” said Arreola. “I’m about excitement and I know that everyone who comes out in El Paso and everyone watching on television will get an entertaining fight.”

Tickets for the live event, which is promoted by TGB Promotions in association with Warriors Boxing and Cyclone Promotions, are priced at $50 or $25 for general admission and are on sale now. To charge by phone with a major credit card, call Ticketmaster at (800) 745-3000 or the University Ticket Center at (915) 747-5234. Tickets are also available at www.ticketmaster.com.

An accomplished amateur who won Irish national championships in 2005 and 2009, plus a European Union Juniors silver medal in 2007, the 28-year-old Frampton has had major success leading to his U.S. debut on July 18. From Belfast, Northern Ireland, United Kingdom, Frampton won his world title in Sept. 2014 with a dominant unanimous decision over Kiko Martinez. His most recent fight was a title defense in February of this year in which he blasted Chris Avalos on the way to a fifth-round stoppage.

The son of a former world champion, the 22-year-old Gonzalez Jr. is looking to make his mark in this nationally televised fight. The Tijuana, Mexico native was impressive in his previous bout on U.S. soil, knocking Leopoldo Gonzalez down three times on his way to a first-round TKO in El Paso. He returns to El Paso looking to build on his three-fight win streak that has seen him take down Javier Franco, Alem Robles, and Gonzalo Garcia.

The 34-year-old Arreola defeated Curtis Harper in a thrilling heavyweight showdown on March 13 in Ontario, Calif. Born in Escondido, Calif. but fighting out of Los Angeles, Arreola has long been one of the most feared punchers in the heavyweight division. Having challenged the best in the division, Arreola knows what it takes to succeed at this level and looks to entertain the fans on July 18.