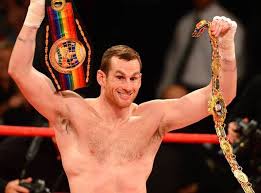 David Price (19-2, 16 KOs) will travel to Stuttgart, Germany on July 17 to challenge Erkan Teper (14-0, 9 KOs) for the vacant European heavyweight title. Contracts have been signed, and venue and ticketing details will be announced shortly.

Price is currently recovering from a minor neck injury, which left the former British and Commonwealth champion unable to compete in a scheduled ‘homecoming’ fight at Liverpool’s Echo Arena on June 26.

Already back in the gym and set to resume full training next week, the 31-year-old insists he is ready to make history by becoming the first heavyweight from Liverpool to claim the European crown.

‘’This is an absolutely massive fight for me,’’ said Price. ‘’To win the European title, and to become the first heavyweight from Liverpool to do it, would mean the world to me. It’s something no one could ever take away from me and would confirm my credentials as a world title contender.

‘I’ve watched all of Teper’s fights and he is the perfect opponent for me. I’m 100% confident I will win. He is exactly the type of fighter I’ve been looking to fight, so to do it with the European title on the line is an added bonus.

‘’I’ll tell you now; he has never been in the ring with anyone who can punch like me, who can move like me and with my ability. I’m not messing around anymore. I’m coming with bad intentions. In my last couple of fights I’ve been trying out things we’ve been working on in the gym and my opponents may have got off a little lightly, but this time it’s for real, and I’m looking to do some serious damage.

‘’Germany is like a second home for me, so I have no problem going over there to take the title. It may be my first fight as the away fighter, but I’m looking forward to the challenge, and I believe I’ll thrive under the pressure. I want to bring the European title home and defend it at the Echo Arena ten years on from when Liverpool became champions in Istanbul!’’

‘’David has successfully worked himself into the position to challenge for the European title with four good wins and now it’s time to bring the belt home,’’ said promoter Kalle Sauerland. ‘’The heavyweight division is thriving at the moment and this is a chance for Pricey to prove that he is not only the best in Europe, but that he’s ready to challenge for world titles. It’s not going to me easy. Teper is a good fighter, who is undefeated for a reason, but he’s never met anyone like David before. On July 17, we hope the British fans get behind their man and travel to Stuttgart to cheer him to victory!’’