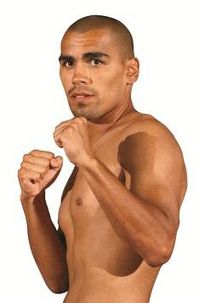 On September 14th, “King” Carlos Molina well step onto the biggest stage in boxing on what looks to be one of the biggest boxing events in history when he faces Ishe Smith on the undercard to Floyd Mayweather vs. Saul Alvarez.

Bad luck has plagued Molina throughout his career and it struck him again a couple months back when his fight with Ishe Smith was canceled but hope was not lost for Molina. It was later announced that the fight would still take place just at a later date.

Molina has now had to hold two training camps to prepare for his upcoming battle and a fear that his fans may have is that he may have over trained.

“I couldn’t feel any better,” Molina said. “I just feel good. I had two training camps for this fight. I have been training since my last fight in February. All summer long. It kind of ruined my summer but it is worth it. I want that belt. ”

Molina has been in the gym since the last time he fought which was in February so how could he not of over trained?

“You gotta be smart when it gets closer to the fight. Right now, work your ass off, work hard. As soon as you get close to the fight, about a week, week and a half you cut it down, you taper down, just recuperate and save it for the fight,” said Molina. “You don’t want to do anything that is going to leave you soar or burn you out that close to the fight because the hard work has already been done. I have been doing this all summer long and I have been pushing my body to the max and you just have to be smart at the end.”

Being in the ring takes a toll on a fighter physically and mentally on a fighter but when you are clearly the victor and the decision goes the other way it can really screw with your mind and your emotions. Carlos Molina has had to face that several instances in his career.

“It did (get depressing) for a little while but you just gotta brush it off. You have to. It’s boxing. It’s tough. It’s a tough sport. I knew going into it that it’s a tough sport and you gotta brush it off. I don’t let anything get to me. That is one of the most important things in boxing, mentally. You have to be mentally strong because not everything is going to go your way you have to be focused. I feel like it happens for a reason. All those fights, everything that I have been through, it just made me a better fighter and where I am at now is the perfect time for me to fight. I can fight anyone, beat anyone in my division.”

When fighting a champion you have to knock them out or win very decisively but the task ahead is going to be more difficult than that. Molina is facing not just a champion but a Mayweather Promotion’s fighter on a Mayweather Promotion’s event and the deck is stacked against him as has been the case in several other instances when someone faces the same obstacles. Is Molina ready to face those obstacles?

Molina seems like he is more than ready and prepared to do what it takes and despite criticism from those in the boxing world and his opponent he has his plan and plans on sticking to it.

“They say I clinch a lot. I did that with the Kirkland fight and then everybody judged me by that one fight. I want to get everybody’s mind of that fight, that performance. I am not even to happy about that performance. As far as this one I gotta take his heart, take his will. I am going to go on after him from the first round and go for the stoppage. That is what I am going to have to do.”

Even though Molina has lacked a lot of KO’s and his punching power is often questioned he still would like to stop his opponent. Despite the fact that he had a short amateur career he is still learning and still developing as a fighter and power can come in time.

Before getting his opportunity for the IBF title Molina had a hard time landing opponents because of his fighting style and the fact that many did not consider him a name opponent.

“I feel like I am the top 154 pounder. It’s harder to get those big fights that you know you can win or are winnable
fights for you but to get them is a whole different story. Part of it is my fault too. I feel like I left those fights close. Even though I felt that I won them I left them close. I don’t wanna go in there and hang with them or leave them close I want to go in there and win it decisively and that’s my plan from now on.”

Ishe Smith knows what it is like to be in Molina’s situation. Smith has faced hardship in his personal life which affected his career. Smith knows the hunger that Molina has and feels that he is giving Molina a golden opportunity because Molina’s resume is not worthy of fighting for the title.

“When it comes down to it all that doesn’t matter because we are going to get in the ring and fight. Even if he has a better resume and I go in there and beat him then what does a resume matter now you know? He can think my resume ain’t shit or whatever but when it comes down to it I am coming for that belt and I am more focused than ever.”

Molina wants to face the best and has never backed down from a fight. The fact that he can’t land those fights is not his fault and should not go against him. He has called out some of the biggest names and has been given nothing. Everything he has is earned.

“I am so competitive. I want to fight the best. I see these guys fighting on TV and they say that nobody wants to fight them and I’m like ‘right here'”. I am raising my hand and I am like ‘what do you mean nobody wants to fight you’? I want the toughest fights and that’s why I am glad I am in this division because I can push myself to the max and I wouldn’t have it any other way. In reality I earned this opportunity. I have been working my ass off for eleven years now as a pro and I earned this number one spot and that’s the only reason why I am getting this chance.”