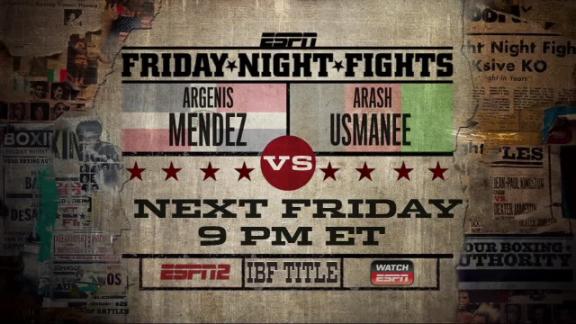 With a season full of exciting and memorable bouts, the season finale of ESPN’s Friday Night Fights series certainly had an expectation to meet or even surpass. Luckily for both the broadcast team and the fans, the August 23rd edition of Friday Night Fights managed deliver in just about every regard. Featuring a pair of title fights, the televised card was both exciting and memorable, and as boxing fans what more could we ask for?

The co-main event of the broadcast was a 12-round featherweight tilt between Claudio Marrero (14-1, 11 knockouts) and Jesus Cuellar (23-1, 18 knockouts) for the interim WBA Featherweight title. With both fighters penchant for putting on exciting fights there was little doubt that this bout would be a barn-burner from bell-to-bell, and that was certainly the case.

From the opening bell it was clear that both fighters were trying to make the most out of their opportunity as they both came out swinging for the fences. Cuellar came out especially wild and for a moment seemed to briefly stun Marrero. As soon as this occurred, Marrero came back with his own flurry leading to a series of wild exchanges between the two in center ring.

Round after round this trend would continue, but with all of these sloppy exchanges between the fighters it was clear that Cuellar was the more suited and successful when it comes to implementing that style of gameplan. Although Marrero was throwing more shots at times, it was easy to see that Cuellar was having a much easier time connecting with his punches and often hurting Marrero. Marrero would still manage to keep things interesting however as soon as he would land a bomb of his own, but Cuellar would just shrug it off.

As the fight wore on, the beginning of each round would seem more tactical than the last, but tactics would quickly be abandoned for aggression as soon as one fighter got a good shot in. Things began to look better for Cuellar in round 5 after he was able to trap and hurt Marrero along the ropes, and did much the same in round 6 which led to a knockdown. Although the call was questionable, it no doubt served as a swing of momentum in Cuellar’s favor.

Sensing the probable points deficit, Marrero really began to come forward and rally hammer Cuellar with a series of hooks to both the head and body. However, just as the momentum was seeming to once again shift, Marrero would gas and allow Cuellar to perhaps steal an otherwise Marrero round. With both fighters exhausted but still hungry for the victory, the two battled it out for the remaining rounds. By the end of the 12th round, the question was whether Marrero may have done enough to steal the fight, but it was clear that Cuellar was the much more dominant fighter between the two. All three judges seemed to agree as they awarded Jesus Cuellar the victory on scores of (115-112), (114-113), and (116-111).

The main event was a super featherweight title fight between champion, Argenis Mendez (21-2-1, 11 knockouts), and challenger, Arash Usmanee (20-1-1, 10 knockouts). Even though Mendez was recognized as the champion, many of those ringside and online felt that this was a fight that screamed upset. Especially because Usmanee was looking for redemption after that butchery of a decision he lost against Rances Barthelemy (19-0, 12 knockouts) back in January.

From the opening bell to the final bell, Usmanee fought like a man with a massive chip on his shoulder. However, with a mix of aggression and solid technique, Mendez seemed out outbox and sometimes even outwork the challenger throughout the fight. Still, Usmanee wouldn’t go away and certainly did the most he possibly could in regards to attempting to win the title.

Much like the co-main event, this fight was a constant back and fourth of violent exchanges, but it was clear who was getting the best of them. After a hard fought twelve rounds, many were convinced that Mendez had done enough to walk away with the title still strapped along his waist. Even ringside commentator Teddy Atlas (who thought that Usmanee would score the upset) had the bout scored as 119-109 route for Mendez. In a trend that has become all too familiar however, the judges managed to see a very different fight than everyone else. The judges scorecards were (114-114), (115-113, Mendez), and (114-114). The majority draw allowed the rightful fighter to keep his belt, but it was the unsatisfying conclusion and sole sour note to an otherwise fantastic finale to a solid season of Friday Night Fights.