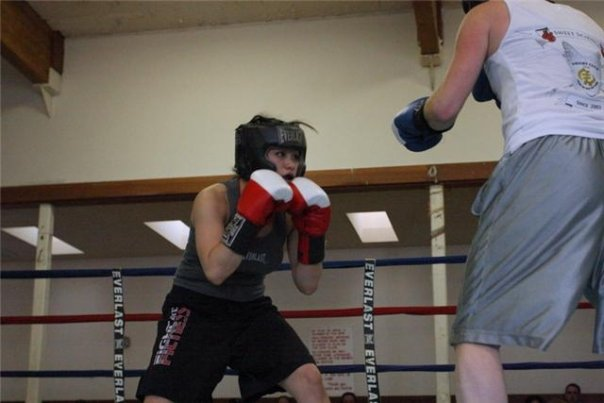 Fight fans are never that found of the word Amateur boxing as it seems to allude to the boxing they may witness at the Olympics that does not mirror the frantic pace as the professionals as well as the bizarre scoring system that at times seems to neglect body punching as a whole. Then throw in the term Women’s boxing which to some means turning the channel as well and now you have a conversation starter that could possible end at that. So with such a pessimistic introduction why continue, why read more? Well for starters, the opinion on Women’s boxing and the amateurs to a less degree tend to be small minded stereotypes that people refuse to try and break.

In the modern era, we are now witnessing a second resurgence of women’s boxing as fighters such as Ava Knight and Kaliesha West who are not just proving their dominance, but also proving to be simply the best in their weight class bringing elite level fighting to the women’s division. On top of all of this, the snickering and lack of attention from mainstream media has created a chip on the shoulder of a lot of the fighters whom more often than not put on the best fights of cards being shown for that evening.

At the heart of this next wave of young and hungry female fighters pushing the sport further is San Mateo’s Casey Morton. The B St Boxing fighter being trained under the tutelage of Eddie Croft has created quite the buzz and even at the amateur level finds herself at the talk of the peninsula.  Morton who originally began fighting at Fight and Fitness found herself the 2011 Northern California Golden Gloves champion, open weight just a mere month after making the switch to B St Boxing thus proving to Morton that the change was a step in the positive direction.

Morton, the 2012 Addidas National Champion found herself in an entertaining affair in her previous bout on the beautiful brawlers card in which she got everyone out of their seat as she went to war with Poulo Estrada in which Morton was unsuccessful in getting the decision victory yet earned respect from everyone in attendance. The 113 lbs Morton rarely finds herself in fights that are a lull for action and the fact that she enjoys banging and with a major influence being Arturo Gatti gives some type of context to whom she molded some of her crowd pleasing antics after.

Morton who feels her style of fighting still in transformation, looks to improve and accredits UFC vet and coach Chris Cariaso, who places a focus on hitting and not getting hit as well as footwork. It is a task that many look at for improvement, but the competitive Morton takes it as a challenge to consistently get better. Morton wants to learn in the amateurs and get her mistakes out of the way while an am and then transition to the pros as a well refined fighter.

Morton will be back in action on Saturday August 31st in which on the third installment of the beautiful brawlers boxing series , which gives all the attention to the future stars of women’s boxing in the bay area. The event which is being promoted by Babyface boxing begins to 1pm at 3151 Edison Way, Redwood City, CA with general admission tickets beginning at $20 and ringside at $60. For more information or to buy tickets in advance go to BabyFaceBoxing.com