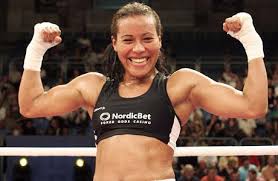 The pound-for-pound number one put on a dominant performance to earn a unanimous decision victory over Lamare, who was floored in the seventh round but able to last the distance.

‘’The only reason Lamare was still standing was her twenty years of experience,’’ said Braekhus. ‘’Me and my new coach Otto Ramin have trained explosively and that came through in this fight.’’

“Cecilia was very strong, and an incredibly good boxer,” said Lamare. “For me, the time has come to step down. I wish Cecilia all the best in her career.”

In the evening’s Swedish main event Erik Skoglund (19-0, 10 KOs) successfully defended his European (EU) title against Adasat Rodriguez (9-3-1, 6 KOs). The Spanish challenger, who was cut above the left eye in the seventh round, put on a brave display but was ultimately outworked and outclassed by Skoglund, resulting in a twelfth round TKO.

Also in action was Mateusz Masternak (31-1, 23 KOs). ‘’The Master’’ scored a fourth round knockout victory over Sandro Siproshvili (27-18, 13 KOs). The Polish cruiserweight took control of the early rounds before landing a big right hand in the fourth, which sent his opponent to the floor and down for the count.