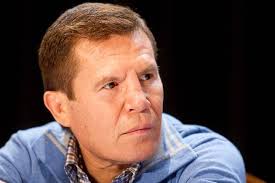 Aggressive, determined and fearless. Proud Argentine and former welterweight champion Marcos “El Chino” Maidana has won the respect of some of the greatest Mexican world champions of our time for the fiery intensity he brings each time he steps through the ropes.

The fact that Maidana is the only boxer to defeat Adrien Broner and one of the very few in history to give 11-Time World Champion and perennial No. 1 pound-for-pound superstar, Floyd “Money” Mayweather, a legitimate test only adds to the anticipation heading into their upcoming rematch.

Here’s what the Mexican champions have to say about Maidana as we inch closer to “MAYHEM: Mayweather vs. Maidana 2” on Saturday, Sept. 13 live on SHOWTIME PPV® from the MGM Grand Garden Arena in Las Vegas.

JULIO CESAR CHAVEZ, three-division World Champion and Boxing Hall of Famer
“We all know Marcos Maidana is not a technical fighter, but nobody can deny he is a very dangerous one, perhaps one of the most dangerous fighters Mayweather has ever faced.

“I must confess I was amazed to see how courageous Maidana was; he squared up in front of Mayweather and just went at it with everything he had.

“Maidana possesses a singular characteristic that we usually see only in Mexican fighters – he is simply fearless. He is brave and powerful and from the moment he steps into the ring he fights like there’s no tomorrow.”

“I remember watching the first Mayweather vs. Maidana fight back in May and I can say, Maidana left his heart in the ring. He fights with passion and aggressiveness. He leaves it all out there.

“There’s no boxing in Las Vegas or anywhere without great Mexican fighters. We all know that. And Maidana has the heart of a Mexican warrior.”

ISRAEL “MAGNIFICO” VAZQUEZ, former super bantamweight World Champion
“Marcos Maidana’s boxing style resembles that of the great Mexican fighters. He is fearless, doesn’t stand down, he likes to pressure his opponent and has a very powerful punch.

“You have to give Maidana some credit for his boxing skills; he has won the lead role in a rematch fight against one of the best fighters in the world, Floyd Mayweather.

“Besides being a very good fighter, Marcos has a very nice characteristic, he’s truly humble. That’s a feature you don’t find that often in boxers of his caliber.

“This is a very tough fight for the both of them; that’s why I’ll refrain from any predictions. Both fighters have a big test in front of them.

RAUL “DIAMANTE” MARQUEZ, Former IBF 154-Pound World Champion
“Maidana is a fighter that takes the lead and doesn’t back up. He comes prepared and he comes to fight.

“Nobody thought that he was going to stand up to Mayweather like he did. He left his heart in the ring.

“He made all Latinos proud. He stood in front of Mayweather like true Mexican champions do.

“He can go the distance if he wants, he’s aggressive. He fights with the determination of a Mexican.”