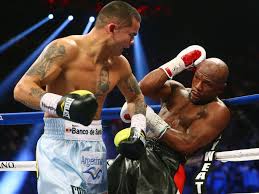 When most people think of former WBA Welterweight Champion Marcos Maidana the first thing that comes to mind is his punching power. He has never been in a boring fight and he leaves people on the edge of their seats waiting in anticipation for him to land that big bomb that could end the fight at any time.

May 3rd was no exception, when he lost a majority decision to pound for pound king Floyd Mayweather. Maidana took it right to Mayweather and hit him more than he has been hit in recent years. He put tons of pressure on Mayweather and appeared to make him very uncomfortable. The fight was very close and some even had Maidana winning  but ultimately he came up short on the scorecards. The big question in the rematch is if the fight goes to the cards again can Maidana get a decision? He seems to think so. “I think that I can win by decision or by knockout. The first fight was a very close fight.”

“It was a decision that was a majority decision, so I feel that I just have to make a few adjustments, put a little more pressure on, land better punches, and yes I can win, I can win by decision. But obviously the knockout would be nice, and that’s a possibility as well.”

So what can he do differently this time around to ensure victory? “The first fight I think that my attack, the pressure, was very good, but I didn’t do well with my distance control. I think I smothered a lot of my punches, I wasn’t able to really catch him with good solid shots, being able to extend my punches, and that’s one of the things that I’m working on.”

“Because I smothered my punches I don’t really think I ever hurt him, but this time around if I get him with good solid shots, work my distance control, I think I can hurt him.”

It was well documented during the lead up to the first fight that Maidana was preoccupied with a lot of other things and really didn’t have a full training camp due to his wife’s pregnancy. He says things are different now for the rematch. “This time around I’m training to win. I know what to expect. I know Mayweather now, his style, what he brings to the table. I’m coming to win. I have more concentration, no excuses whatsoever, and adequate time.”

Mayweather rarely gives opponents rematches and the last time he fought in one was back in 2002 against Jose Luis Castillo. So why did Maidana get one? “I think that I got the rematch because it was a close fight. It was a close fight. He probably wants to prove a point. He wants to demonstrate that he can beat me outright. It doesn’t really matter. What matters is that the rematch is happening, and I’m very happy.”

The big controversy that seemed to be the focal point at the end of the first fight was Mayweather’s criticism of referee Tony Weeks. He felt that Weeks let Maidana get away with too much rough stuff. For the rematch Kenny Bayless will be the referee. Bayless has refereed many of Maywether’s biggest fights and some have said that because of that he may favor him during the matchup. Maidana isn’t really concerned about all of that though. “Maybe the referee is going to intervene. Maybe he’s going to be a big part of the fight. I really don’t know. I’m going to go in there and I’m going to do my job. I’m going to do what I’ve been training for, what my work is, and I’m going to go there and work. It really doesn’t matter to me.”

Regardless of how successful Maidana was in the first fight, he knows that he has to do more in the rematch in order to get the win this time around. “I have to keep pressuring him. When I was able to pressure him in the first fight and get him on the ropes and fight with him, make him fight, I did very, very well. Whenever he moved, that’s when I had problems with him, but this fight here I want him to stand and fight like a man, he said.”