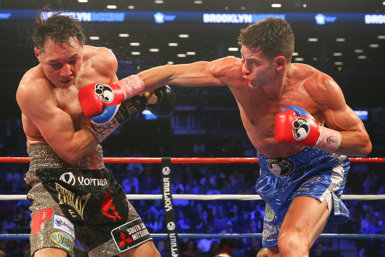 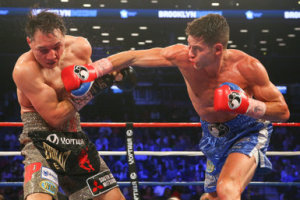 At the Pacquiao-Algieri press conference in New York, ThaBoxingVoice.com had a chance to speak with Chris Algieri. The 30-year old WBO Light Welterweight Champion will be fighting the WBO Welterweight Champion and number two pound for pound, Manny Pacquiao, on November 22 in Macau, China.

Comparisons have been made between Chris Algieri and Oscar De La Hoya, a former Manny Pacquiao victim. While the height and the looks might be the same, the fighter assured us that there will be a different fighter in the ring. “The Oscar that fought Manny back then, was not the Oscar he used to be. I am young and hungry.”

The fighter also had a word for the people who say that Chris Algieri is not on Manny Pacquaio’s level. “This press tour is gonna have people see who I am. They’re gonna see how I approach this. How hard I train. They will realize that this is a real fight.”

We concluded the interview with asking how Chris Algieri plans to deal with Manny Pacquiao’s high output and speed. He answered, “The jab. My mental competitiveness and my ability to stick to the game plan my team comes up with.”