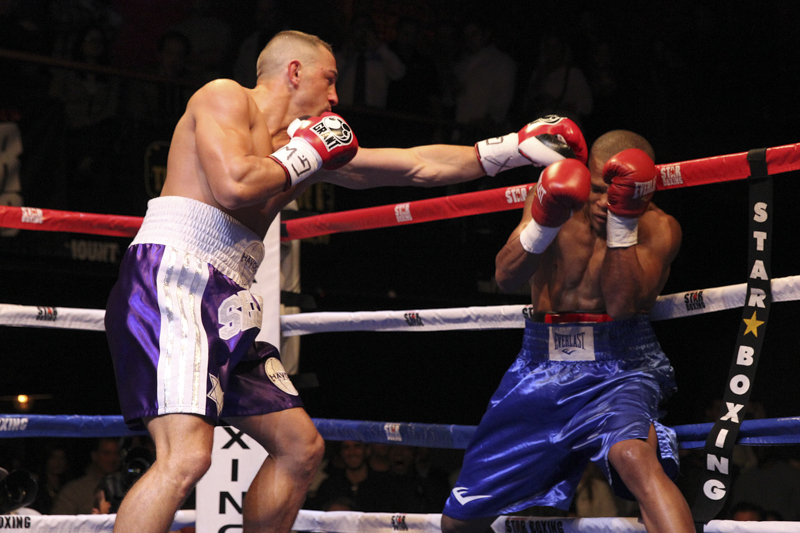 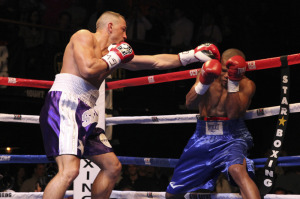 Before another packed house on Friday, Sept. 19th, at The Paramount in Huntington, NY, undefeated, fast rising, Jr. Welterweight prospect Cletus “The Hebrew Hammer” Seldin (14-0 11 KO’s Long Island, NY), blasted out spoiler Ramesis Gil with a sensational one punch knockout in the 2nd round of a scheduled 10 round Jr. Welterweight bout.

hard shots and little to choose between them. The 2nd round began with Seldin stalking Gil (8-9-5 5KO’s Santo Domingo, DR) backing him up. Seldin beat Gil to the punch and landed a thunderous right hand on Gil’s chin. Gil crumpled to the mat and was counted out giving

This was your classic Boxer-Puncher match that saw Gotay constantly pressuring the moving Marengo throughout the fight. Marengo countered Gotay’s charges with sharp punches and scored a highly questionable knockdown in the 4th round that Gotay was dominating and in all likelihood was the deciding factor in the fight. The action was fast paced over the 8 rounds and the final scores were 78-73, 77-75, 76-75 all for Marengo (7-8-4 4KO’s Arecibo, PR).

Undefeated Romanian Heavyweight Constantin Bejenaru (6-0 3KO’s Catskill, NY) scored a convincing one sided victory over Tyyab Beale (9-6-1 3KO’s Newark, NJ) in an action packed exciting 6 round Heavyweight bout. Bejenaru was the busier of the two often landing huge blows that had the crowd oohing and ahhing. Bejenaru scored a knockdown in the 6th round that sealed the victory 60-54 on all three cards.

In an all out war local Jr. Welterweight Anthony Karperis (8-1 3KO’s Hicksville, NY) scored a split decision victory over battle tested Jose Valderrama (4-8 3KO’s Arecibo, PR). These two young fighters went at it from the first bell standing toe to toe exchanging blows. The 2nd round was a classic round as Valderrama hurt Karperis early in the round with a straight right hand but then walked into the same punch thrown by Karperis which badly hurt him. Karperis jumped all over Valderrama looking for the early finish but Valderrama hung in there and had Karperis backing up at the end of the round as the packed house were on their feet cheering.

Valderrama scored a knockdown of Karperis in the 4th round with a beautifully thrown right hand but Karperis battled back as he had Valderrama pinned in the corner as the bell sounded to end the round. Two judges had it 57-56 for Karperis while the 3rd judge favored Valderrama by the same score.

Local favorite John Hernandez (1-01KO Huntington, NY) thrilled his large throng of fans by scoring an exciting TKO at the end of the 1stround over Dwayne Holman (1-3 Monclair, NJ) in a scheduled 4 round Lightweight match. After a thrilling first round between these two young fighters, Holman was forced to retire at the end of the end due to an eye and nose injury.

The bouts were presented by Joe DeGuardia’s Star Boxing who have turned The Paramount in Huntington, NY into quite possibly the best fight club in the US.