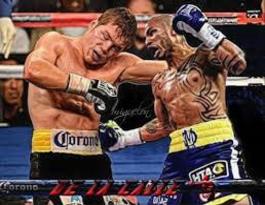 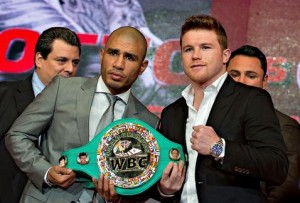 LONDON (17 Nov) – Boxing superstar Canelo Alvarez has refused to look too far ahead as he prepares for his ’50-50’ fight with WBC middleweight world champion Miguel Cotto.

The stacked 160-pound division is brimming with talent including WBA and IBF knockout king Gennady Golovkin, WBO champion Andy Lee who defends his title against the undefeated Billy Joe Saunders, with Daniel Jacobs set to take on former champion Peter Quillin.
The victors are expected to face each other to determine who is the undisputed number one at the weight but Mexican ace Canelo knows he has it all to do against the legendary Cotto in an edge-of-the-seat BoxNation thriller exclusively live this Saturday night.
“I am 100% focused on this fight. My focus is winning this fight – it’s very important. Whatever happens after this fight, will happen after this fight, but this is my primary focus,” said Canelo.
“The only thing that I am focused on is Saturday night. Once this fight is over, we will determine which direction we will go.
“This is a very difficult fight – it’s a 50/50 fight. I’m here, I’m ready to win, and I’m willing to win. All my fights are necessary to win,” he said.
The bout represents one of boxing’s most anticipated fights this year with both men renowned for their exciting all-action styles.
They have a common opponent in pound-for-pound hotshot Floyd Mayweather, with four-weight world champion Cotto having given the unbeaten star a tougher night when they met back in 2012, something which will have no bearing on this fight according to Canelo.
“You know what, that doesn’t affect me [people saying Cotto did better]. Styles make fights. He may have done better – Cotto might have done better against Mayweather. However, I did better against Austin Trout, and Cotto didn’t do that good against Austin Trout,” Canelo said.
“All fights are different, all styles are different, so that’s not going to affect me at all.
“All of my fights I learned something. There are some important fights, there are some difficult fights, but with all these combined fights you gain experience, and with that experience I’m going to display that on Saturday night,” he said.
Canelo goes into the fight with just that solitary loss on his record to Mayweather having accumulated 45 wins, including 32 knockouts, at just 25 years of age.
The former unified light-middleweight champion will have the chance to become a two-weight world champion against the Puerto Rican Cotto in what is his most significant fight since he shared the ring with Mayweather.
“I’m not worried about the pressure. I am more concerned with the motivation. I am training. I’ve had a lot of fights, and I’ve learned a lot,” said Canelo
“Both of the fights [Mayweather and Cotto] are important. They’re in a different division. The one with Mayweather was for the unification of pound-for-pound, and now this is at a different weight division, so it’s important also.
“Plus, this is Mexico versus Puerto Rico, and more importantly I’m motivated and inspired and looking forward to Saturday.
“It’s going to be a great fight. The styles will accommodate to ensure that. If the knockout comes, it comes, if it doesn’t, I’m prepared for whatever happens in the ring,” he said.
Cotto v Canelo is live on BoxNation (Sky 437/490HD, Virgin 525, TalkTalk 415, online or app) this Saturday night. Visitboxnation.com to subscribe.

BoxNation, the Channel of Champions and proud partner of Rainham Steel, is the UK’s first dedicated subscription boxing channel. For £12* a month and no minimum term customers can enjoy great value live and exclusive fights, classic fight footage, magazine shows and interviews with current and former fighters.

Previous highlights have included Haye vs Chisora, Khan vs Collazo and Mayweather vs Maidana.

The channel is available on Sky (Ch.437), Virgin (Ch.546), TalkTalk (Ch.415), online at Livesport.tv and via apps (ios, Android, Amazon). BoxNation is also available in high definition on Sky (Ch. 490), at no extra cost to Sky TV subscribers, providing they are already HD enabled.

BoxNation is also available to commercial premises (inc. pubs, clubs and casino’s) in the UK and Ireland, for more information on a commercial subscription please call 0844 842 7700.

*Plus £8 registration fee for Sky TV and new Livesport.tv customers.