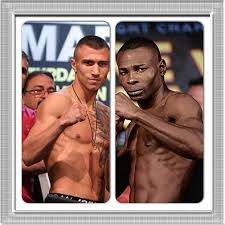 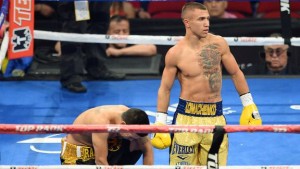 Lomachenko and Rigondeaux, two legendary  fighters in the amateurs, have been creating quite a buzz over Twitter in the past few months. When asked which of the two insinuated the social media exchange, Lomachenko offered this through his translator, “I did not call him (out), he called me, I can’t call out a smaller guy, I have to call even guys and he’s a small guy, so he called me first and I answered yes, I want to fight him”.
An immediate reaction to his quote is how Lomachenko is almost diminishing what he identifies as a “smaller” fighter in Rigondeaux, and in terms of weight classes he is correct. However, Lomachenko appears not one to back away from those who call him out, which is encouraging as there are very few who are willing to accept a challenge from the undefeated  “El Chacal “
Rigondeaux, who recently signed a promotional agreement with Roc Nation sports, will be featured on the Miguel Cotto vs Saul Alvarez undercard on November 11th versus challenger Drian Francisco (28-3-1, 22 KO’s). Question is will the polarizing Rigondeaux continue his pursuit of Lomachenko if he should be victorious- as expected.
Politically, the framework for a Lomachenko-Rigondeaux is possible with their respective promotional entities (Top Rank and Roc Nation) aligned with HBO. However, in order to cross over to casual fans of the sport and to enhance the promotion, Lomachenko vs Rigondeaux might make sense to “marinate” to a later date, perhaps the later 2016/early 2017 timeframe.
Tweet