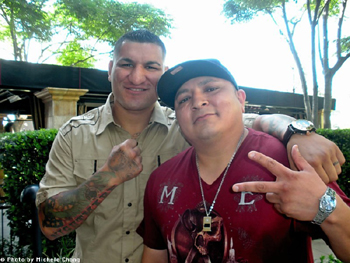 The Heavyweight division of this era has been dominated by one name, Klitschko. Whether it’d be Vitali or Wladimir, there hasn’t been an ounce of worry or discomfort in any of their fights for some time now. Vitali is 40, holds the WBC World Heavyweight title and getting up there in age. While Wladimir is still trucking along holding on to every other belt in the division (The Ring, WBA, WBO, IBF, IBO). While there aren’t many interesting matchups left for either brother, and with most of the more compelling heavyweight matches lying in the second tier in the division, most fans wouldn’t complain if they saw a clash between Chris Arreola and Wladimir Klitschko.

Both brothers have bouts coming up with Vitali taking on Manuel Charr this Saturday September 8th, while Wladimir is scheduled to take on the tall Pole Mauriusz Wach on November 10th. So a fight between Arreola and Wladimir would most likely not take place this year, and since Vitali handed Arreola his first loss in a one sided bout, the bout between Chris and Wladimir makes sense for 2013.

ThaBoxingvoice.com spoke to Chris’ trainer, Henry Ramirez regarding the future of his heavyweight fighter. “Chris is back in full training, he’s ready for his next fight which will probably take place in late October, he’ll be fighting a top 5 guy in the WBC,” stated Ramirez. When looking up and down the WBC rankings, the only name that stuck out was Bermane Stiverne. Stiverne-Arreola was a bout that was already in discussions for happening and according to Ringpolska, there is a purse bid set for September 3rd to make that fight. The winner of that fight would most likely end up being Vitali Klitschko’s mandatory.

However, most fans would not want to see a rematch between Vitali and Chris as we already saw how the first one ended, and no one was screaming rematch. In our talk with Ramirez, he gave us clues and hints as to why they are fighting a top rated WBC fighter. “There’s a threat in any fight, regardless who it is. The reason we’re taking this fight, I’m not at liberty to say, but it will make a fight with Wladimir Klitschko and Chris Arreola much bigger in the first quarter of 2013, much more tremendous and little bit bigger than it is already,” explained Ramirez.

If you read between the lines, the only thing that could make Wladimir Klitschko vs. Chris Arreola bigger is if they were for all the belts in the heavyweight division. The only belt that Wladimir does not have is the WBC which is held by Vitali, meaning this fight with Manuel Charr might be the last for the great heavyweight. Vitali is 40 and has already hinted at making a run in politics. At the age of 40, Vitali isn’t getting younger and has little if anything else to prove in his division where there aren’t much challenges.

That would mean a possible Arreola-Stiverne bout would be for the vacant WBC title or the winner would fight Wladimir for a vacant belt for all the marbles in early 2013. Ramirez is ready and feels Arreola is too. For Arreola, camp is now more about focus, and less of a fat camp in trying to lose weight. Ramirez added, “Preparation and lack of focus were a problem in the beginning for Chris, but it’s not anymore. But he’s ready. The preparation and mental focus are there, boxing has to be put first. You have a 4 or 5 year window where you have to be focused, after that no one’s going to give a sh*t about what you do in your diet and training.”

For Full Audio of This Interview Click Here: http://www.blogtalkradio.com/thaboxingvoiceradioshow/2012/08/26/henry-ramirez-joan-guzman-jessie-magdaleno