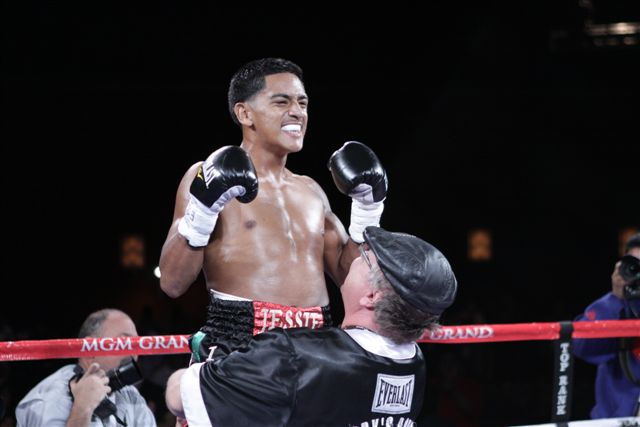 Jesse Magdaleno a hot prospect on the fast track to stardom has been electrifying the ESPN Friday Night Fights for his last two fights and making the city of Las Vegas Nevada hotter than normal for well over a year. He has made the word sensational and his name seem one in the same consistently putting together fan pleasing fights and attracting the attention of the networks. “I believe my first time on ESPN Friday Night Fights when I fought Carlos Valcarcel, I think I made a huge statement that night, and this night it was even better. They both had good records and they were both coming off of wins, I think I did a terrific job. I put a big statement out there for a lot of fighters that can see that I’m young I’m hungry and I want to go for the stars,” explained Magdaleno.

Funny how the fans of the sport didn’t have to wait for this year to see Jesse had Magdaleno taking the advice of his now powerful promoter Bob Arum years ago. Arum wanted to see Magdaleno take a crack at gaining some Olympic gold to his resume.  “Yes it was true. I said I didn’t want to be in the amateurs anymore, I mean I beat a two time Olympian and I didn’t receive the type of exposure, that I thought I would get after beating him, so I was like why am I doing all this hard work? If I’m still just a nobody here in the amateurs. Before I turned pro Bob Arum did tell me wait around for the 2012 Olympics and see how that goes but that was four years ago, I wanted to be pro and I wanted to make a statement and really show people what kind of fighter I am,” said Magdaleno.

Ultimately Magdaleno made the right decision and went with a promotional company with a history of building up their fighters both locally and nationally. Bob Arum has made stars like Mayweather, De La Hoya, and Pacquiao just to name a few, with Magdaleno’s talents the sky is the limit. “Well there were other factors; one of them was my brother, he’s already with Top Rank and already making a statement as well. The second was because they’ve [Top Rank] been following me since I was like sixteen and they were just waiting for that day for me to say I’m turning pro; sure enough a few years later I ended signing with them.”

Magdaleno may train and even spar with Diego but he’s learned to be a finisher all on his own. It’s his natural instinct to go for the kill, seek and destroy action is what this young prize fighter brings into the ring. It’s the type of actions that make fans stand up out of their seats and also has made them want to see more of Jesse. “We sparred one time but that was years ago. I was still in the amateurs; I was only sixteen when I sparred him. I learn a lot of things from Diego, he’s a great boxer. I’m more of a brawler, I get in there [Ring] and I’ll make a statement right away. Whereas Diego will break you down round by round and when it’s time to finish you he’ll take you out. With me when I see an opening I approach it, I take it, and I finish him off,” said Magdaleno.

It’s evident though they share the same last name; they are two totally different fighters.”Me and Diego are two different fighters but we do a lot of movements alike and we’ve always been by each other’s side. Some of our fighting skills are the same. I could say I’m more of a boxer-brawler, when I fight someone that can stay in the ring with me, I can put my boxing skills on display and I’ll show you that I’m not just a brawler. If it’s time to take them out, that’s when my aggression comes out and I put my combinations together with my power, hand speed all into one. That’s when I really get the job done.”

While they are different fighters, the work ethic is the same and you can get the sense that they push each other to succeed. “When comes down to getting the job done we get the job done. We’re both really high competitors with each other so if he’s working hard, I’ll push the limit and work out harder than he will. It’s always like that but we always push each other in a good way, it’s never a bad thing when we’re working out together.”

Being in the hotbed and the capital of the boxing world in Las Vegas, you would think that local talents like the Magdaleno brothers would prove to be a very good draw. The numbers back up that sentiment. “Every time we fight, we sell out the arena. My last fight was sold out and televised on ESPN [Friday Night Fights] and the next day Saturday same thing happen Diego sold out his venue, I don’t see why we would have any trouble when we’re with the HBO and Showtime. I don’t see why we would have any trouble to sell out arenas,” stated Magdaleno

The future is bright for the young Magdaleno. He should be returning soon and gaining a youth title shot in late October or early November. He feels comfortable at the 122 lb division, a weight he’s fought near around his entire career. “”Right now I feel really comfortable at 122, I feel strong. I’m eating right, my conditioning is great, I think 122 is my weight class. I don’t see myself moving up or moving down any time soon.”

Well another brother tandem known as the Klitschko brothers will never get in the ring with each other; Jesse feels the same with his brother Diego, although he doesn’t completely rule it out. Magdaleno jokingly stated, “Hey if the money is right, you never know (laughing).” When he steps in the ring, it’s no joking matter and is a fighter we should all pay attention to.