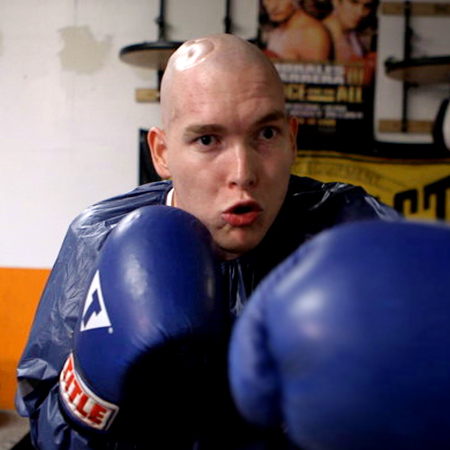 I arrived in Lowell at 8:42 am – on time and nervous. My friend Heather, a Lowell native picked me up and we headed to the gym. Any one who has seen the movie “The Fighter “ can guess what gym. Yea, that one, Micky Ward’s Boxing Center. But I was not there to see Micky. He was not even in the gym that day.

Readers of this site and those who listen to Tha Boxing Voice podcast know I have a place in my heart for Micky, forged by the memories at ringside throughout his fights with Arturo Gatti. Anyone who followed Micky’s career or has seen the movie “The Fighter” knows  Mickey’s story is a great one, what they don’t know is that six days a week, in that same gym, there is another boxer with a another story and he is something.

Ray Greenhalge is Micky’s nephew and godson. He is an avid boxing fan, who knows more about boxing than most experts. He watches fight after fight and always sees something new. He works with children at the local boys and girls club, motivating the kids there to do their best. So what’s different?

Ray was born premature with Cerebral Palsy. Doctors told his mother he would not walk or talk; and by the way, it would be best to leave him in the hospital. The family, not inclined (really not inclined) to accepting defeat, would have none of it. They took Ray home, where at the age of five he began watching boxing with his grandfather, Jerry.

From then on, Ray dreamed of one day being a professional boxer like his uncles Micky and Dicky. His body would not allow it but his mind and heart maintain the passion and vigor that keep him in the gym six days a week. Ray explained to me that during the filming of the movie “The Fighter” he may have over-indulged on the Kraft services provided to those surrounding production. He gained some weight. It got harder to walk and function, and he knew a change had to be made.

A Change Is Gonna Come

One day, as he sat in the gym watching the athletes around him his uncle had a proposition for him. To get in the ring . With the help of both Micky and Dicky, Ray stepped into the ring for the first time, and started working the pads. Since then he has been in the gym six days a week, every week. On Saturdays he goes 12 rounds, professional three minute rounds, on the pads pushing his uncle, the former champion, around the ring.  During the week he works with a trainer doing a complete work out that includes up to 1000 crunches, and a complete medicine ball routine. “Ill work out until I cant work out no more” he said, explaining that it is a passion. He models his determination and drive in the gym after his favorite boxer Floyd Mayweather.

“There is no one who trains harder than Floyd Mayweather,” he says. Accrediting all of Floyd’s success in the ring to the hours spent in the gym. “A fight is won in the gym, you have to be in physical shape, if you are sucking wind the whole time you aren’t gonna win fights” explains ray, who lists Mayweather as one of his idols, along with his uncle Micky of course.

Ray recognizes that the only reason Floyd will go down in history as one of the greatest ever is because of his early start. Referencing the early photos of Mayweather wearing boxing gloves in his crib that we often see on the HBO series 24/7. And believe me, Ray is aware of the all time greats, but we will get to that later.

On Pacquaio vs. Mayweather

While on the topic of Manny Pacquaio we brushed upon the rumors that the Philippine star uses Performance Enhancing Drugs (PEDs). While there has been a few occurrences recently in boxing where PEDs have played a factor in the cancellation of fights, Manny has never tested positive, or tested at all, nonetheless Ray believes the rumors that one of the biggest stars may be one of the biggest abusers. “How can someone go from 106lbs to 154 lbs and not lose any thing” he says speaking of Manny’s speed and agility maintained while he campaigned through different weight classes. Another thing he accredits to Mayweather, who uses Olympic style testing for all of his fights.

Also while on the topic of Pacquaio, we got to talking about his trainer Freddy Roach, who is training Amir Khan, along with others in his star studded stable of fighters. Khan, who is arguably one of Roach’s more famous stars “has defensive flaws” says Ray “the best defense is the best offense, look at Mayweather and Naseem Hamed”. We briefly discussed Roach’s training method, and how his fighters don’t always adapt “Listen, if you need to learn how to counter punch, send the guy to my uncles, Micky and Dicky, they can teach a kid how to counterpunch” he says, referencing not only his uncles’ notorious skills, but also that variety is the spice of life.

When it comes to his uncles as trainers Ray believes they are doing a great job with the stable they have. Including his cousin, Sean Eklund. Coming off of a win in which he looked impressive and showed tremendous improvement, Ray believes that Sean will hold a title one day. “As long as he stays on the right path and listens to his supporters and Micky and Dicky, Sean is a boxer first, not a brawler, and he has speed that is one notch down from Mayweather.” He says of his welterweight cousin who holds a record of eleven wins and four losses, whom he also recognizes as a factor in his triumphs in the gym.

Ray told me that he dreams of following in his family’s footsteps. “If I could have a new pair of legs, and get in there, I’d die in the ring,” he says. Instead he does what he can in the gym, and studies the sport. Both, done with more heart and enthusiasm than most can muster.

My favorite part of my conversation with Ray was discussing our respective pound for pound lists. He mentioned names that I have only ever heard my dad bring into a boxing conversation. With names like Willie Pep, Henry Armstrong, and Carmen Basilio included in his top ten P4P all time list, how could I not be in my glory?

That list, by the way, in no particular order, is Floyd Mayweather, Ray Robinson, Ray Leonard, Muhammad Ali, Willie Pep, Bernard Hopkins, Marvin Hagler, Tony Demarco, Carmen Basilio, and Henry Armstrong. Try to find an average boxing fan who can tell you why each of these men were on that list. I bet you would be hard pressed to do so.

On Oscar vs. Tito

The passion that Ray brings to his conversation about boxing is almost as intense as the drive he brings to his workouts. We talked about some of the bad decisions recently handed out in boxing, and he reminded me that this was nothing new at all, referencing the Felix “Tito” Trinidad v. Oscar De La Hoya fight in which it was clear that De La Hoya had put the work in, but Tito went home with the W. “Don King won that fight for Tito” he says. He also has remarks about Oscar. “ Oscar was an outstanding pro, he will be more remembered for how he left the sport, his struggles, than how good of a fighter he was.”  Mentioning that Oscar simply got caught up in the wrong fight. This interview took place before the controversial Pacquaio-Bradley decision, although I would love to go back and discuss that with him.

I went to the gym in Lowell not knowing what was going to happen. I left with a new friend,  a new outlook and deep respect for Ray. He has overcome much and succeeded. (as highlighted on HBO’s Real Sports with Bryant Gamble).

Today Ray appreciates the help and motivation that keeps him going. He is thankful for the help of his uncle Dicky, Micky, Friends Heather and Jay, Cousin Sean, and his grandfather Jerry, who is his main man. If Ray’s different. We should all be so different, so dedicated, so talented, such good company and so cool.