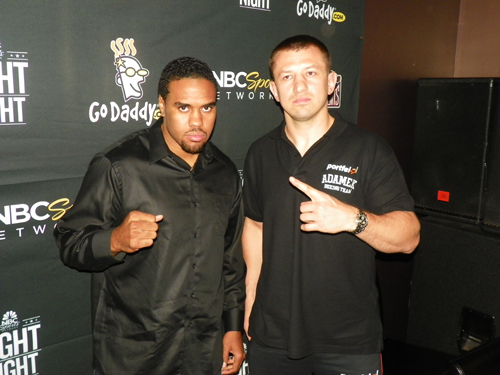 On June 16, at the Prudential Center in Newark, NJ, NBC Sports Network is continuing their Fight Night series with a clash of two heavyweights. Philadelphia’s own “Fast” Eddie Chambers is taking on polish star Tomasz Adamek, who is continuing his journey at heavyweight since moving up from cruiserweight.

Adamek is coming off of a ten round unanimous decision win over Nagy Aguilera that was also featured on the Fight Night series. Before that he suffered a TKO loss to Vitali Klitschko. The fight with Chambers may be an opportunity to solidify his validity at heavyweight. Considering that his opponents at heavyweight have been past their prime. IN Chambers he is facing a young, fast, natural heavyweight.

“Fast” Eddie Chambers, who has also lost to a Klitschko, is also coming off of a unanimous decision win over Derric Rossy. However, that was his only fight in 2011, and he only fought once in 2010 as well. Some say that the lay off gives Adamek an advantage, while others say it just makes Chambers more Hungry. A win over a star like Adamek would put Chambers in a good position, and perhaps put him more on the radar for bigger fights.

Chambers is seen as the better boxer, with more technical ability, and speed. But Adamek might just chase him down, and bring the fight to Chambers. Adamek believes that his speed will win the fight for him; Chambers thinks the same for himself.

It should be an interesting match up between two hungry fighters trying to solidify their stance at heavyweight. I do not think that this will be the kind of heavyweight fight we, as fight fans, are used to. While it is almost certain that the crowd will be mostly the strong polish contingent that Adamek is known to draw at the prudential center, I’m sure a little bit of Philly will be in the house at the rock. As far as picks, The Diva is taking Adamek in a UD.