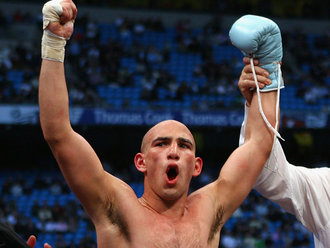 On the 16th June Oldham-based boxer Craig Watson (20-4) will be hoping to come back from his two 5th round TKO losses to current English Welterweight champion Lee Purdy (17-3-1) by fighting Manchester-based Pole Tomasz Mazurkiewicz (5-7-2). The bout will be at the Manchester velodrome on the undercard of Scott Quigg Vs. Rendall Munroe. This should be perceived as a comeback for Watson and he hopes it will be a formality and gain a convincing win.

Already a former European title challenger, alongside former British Welterweight champ and ex-commonwealth champ at both Welterweight and Light-Middleweight, Watson has had quite a career with its ups and down for a 29-year-old. Arguably his most notable win is one which I had the pleasure to watch live at the City of Manchester stadium. This was against fellow Mancunian Matthew Hatton (42-6-2) on the undercard of his older brother Ricky’s bout with Juan Lazcano (37-5-1). He won this fight by a landslide UD and in an impressive manner.

It would not be too presumptuous to infer from Mazurkiewicz’s record that he is considerably less skilled and less experienced than Watson. He himself is on a bad streak in which he has lost his last five fights. Earlier this year he put up a disappointing performance, losing to Scot Rhys Pagan (2-0) in only his second bout. The only person he has fought really worth mentioning is John Fewkes (19-1-1), who was at the time undefeated and has since fought Martin, losing to him in a bout who was supposed to be for his English Lightweight title, until he came in overweight.

The Pole cannot really be seen as a one-punch knockout threat either as only one of his five wins have come by KO In my opinion he does not possess adequate ability for this fight and is hoping to get lucky and end his losing streak with an upset, nevertheless I see him struggling to keep up with the skills of Watson.

To conclude, the result in my opinion will be a KO for Watson in the middle rounds depending on how well the Pole’s chin can hold up. The only remote possibility of an upset here would be brilliant spoiling tactics and completely throws Watson of his game plan. Despite this I am confidant Watson will return to winning form on Saturday.