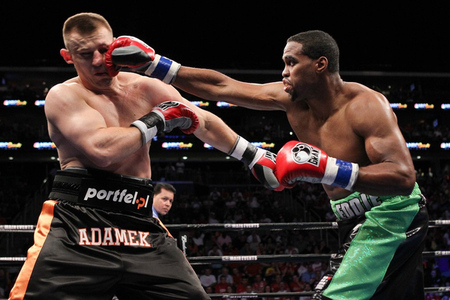 The crowd was a sea of red and white, the colors of the Polish flag, as most of those in attendance were there to support their countryman Tomasz Adamek. Eddie Chambers entered the ring among boos and chants of “Adamek” from the crowd but did not look fazed. He looked confident that he could pull off the upset victory. And although he did not officially, in many eyes, his included he did just that.

Chambers, who weighed in at just 202 lbs, the lightest he has in his heavyweight career felt as though he was in the best shape of his life. Adamek, weighing 225, looked and felt ready as well. However, neither fighter fought the best fight of their life.

The official decision was given to Tomasz Adamek ( 46-2)  with the score cards reading 116-112 (x2) and a lone card of 119-109, which was preposterous, Admaek’s corner even admitting that their Polish star had lost more than one round. However it was Chambers (36-3) who landed 33% of his punches, to Adamek’s 15%. “If he threw a bucket of rice or a bucket of water he couldn’t hit me,” said Chamber’s in the post fight press conference nursing his injured left hand.

The left hand was really the determining factor in Chambers not completely dominating the fight. Injured in the first round, “Fast” Eddie fought the entire fight using only his right hand, which was exceedingly accurate, leaving Adamek with no answers every time it landed.

Chambers was effective in keeping Adamek in the middle of the ring with him, showing what we all knew, that we was the better, more technical boxer. Using movement, and an occasional overhand right Chambers controlled the middle rounds.

In essence, what I saw sitting on press row must not have been what the judges saw. Especially Alan Rubenstein, who had the fight 119-109 for Tomasz Adamek. I will say that there were some close rounds that could have gone either way that I gave to chambers, but only because Adamek was missing so many punches and Chambers was so accurate and effective with the punches he did throw.

I’m sorry to say that lately with the decisions in boxing, I’m beginning to think that it’s just me who doesn’t know what I’m watching anymore. Have I forgotten everything I learned watching the sport for the past ten years? Last night I saw an injured fighter win a fight with one hand. And I saw the other fighter go home with the belt. The only word I can use to describe my feelings on the matter is simply disheartening.