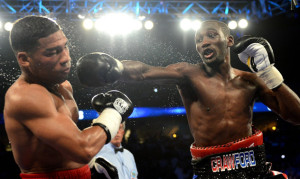 It’s been reported for some time that Terence Crawford (27-0, 19KOs), who lost out to Tim Bradley in the Pacquiao sweepstakes, will fight on February 27th at the Madison Square Garden Theater in New York. However, no opponent has been set for the junior welterweight contender and former lightweight champion.

But it looks like ESPN’s Dan Rafael has a beat on the likely opponent as he reported last night that “Hammerin” Hank Lundy (26-5-1, 13KOs) is the frontrunner.

Thaboxingvoice has since learned that Lundy is not only the frontrunner but, in fact, the only fighter at all in contention for landing the Crawford bout. As Rafael reported, HBO has approved the Lundy as the opponent and Crawford is on board as well, although he has given several interviews over the past few months that suggested he wanted a bigger name in his 2016 debut.

Lundy represents a step back on paper as he has lost to two opponents that Crawford thoroughly defeated. However, Lundy makes for an interesting matchup, especially following his spirited effort against Mauricio Herrera—a fight in which Lundy lost by technical decision after Herrera was unable to continue, thus allowing the fight to come down to a partially scored 5th and final round.

Still, Lundy looked good and he at the very least deserves our attention. He knows that he has few opportunities left, and the desperation could have a positive effect on his style.

Both parties are expected to finalize the deal before the scheduled press conference to announce the card on January 12th in New York. Also expected on the card as the co-feature, the rising Puerto Rican prospect Felix Verdejo.