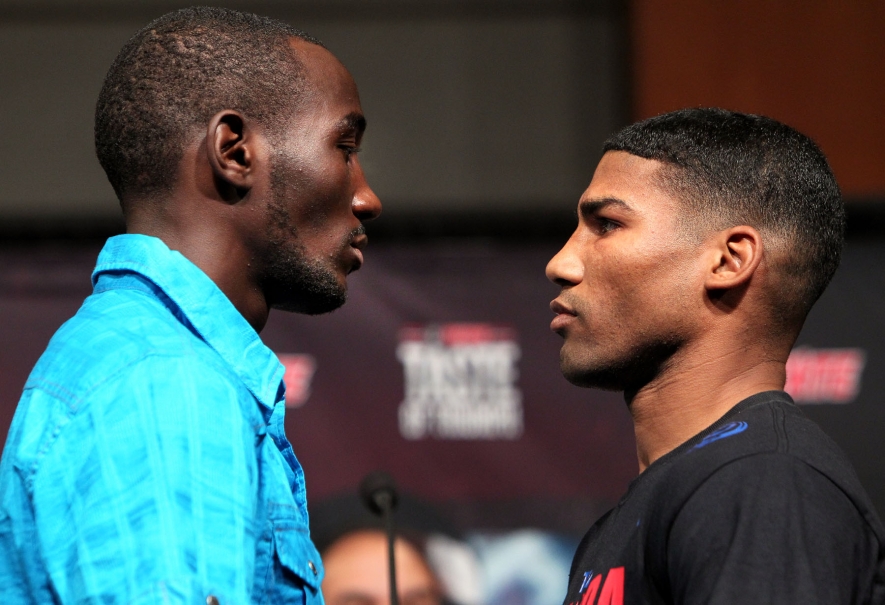 Omaha gets its first title fight in over 40 years this Saturday on HBO with a match-up of speed, wits, and power that may not create explosive action. It will however bring us clarity at the division raising the winners profile at lightweight and beyond.

Yuriorkis Gamboa lived up to his nickname “The Guantánamo Cyclone” when he stormed on to the American boxing landscape via Espn2 Friday Night Fights. After a few highlight reel knockouts HBO came knocking and Gamboa kicked the door down with his blistering hand speed, mixed with heavy hands and vulnerability.
The fans began to call for a lower weight super fight of sorts with Puerto Rican Juanma Lopez, who at the time was making waves with his volume punching and a 1st round knockout over Ponce De Leon. If it wasn’t one punch power, it was rapid fire combinations breaking punch stat records and his opponents will in the process.

His career never came crashing down inside the ring for the way it did for his Puerto Rican rival to be. Gamboa did most of his resume building at featherweight, were his best wins came against Orlando Salido and Ponce De Leon. Promotional issues were among a host of distractions that limited Yuriorkis to only fighting twice since the fall of 2011.

Gamboa’s inactivity in the last two years could prove costly the way it almost did after being hurt by Micheal Farenas. He followed that fight up with an uninspired performance last June versus Darleys Perez.

Terence Crawford on the other hand has been active as ever busting on the world scene with an impressive junior welterweight victory over Breidis Prescott some 15 months ago. After collecting some decent wins he traveled across the pond to Scotland were he challenged lightweight titleholder Ricky Burns. The action was fought at a snail’s pace early until Crawford turned up the heat, completely shutting out “The Rickster” down the stretch.

Crawford was the second option after Mikey Garcia couldn’t come to terms with Gamboa. A win over Yuriorkis may not hold the same weight as it did a few years back, it still holds weight amongst us hardcores.

Breaking down a fight that includes a Cyclone in Gamboa is ironic considering he will be entering Omaha, located in the heart of tornado alley.  Meteorologically speaking, a cyclone is an area of closed, circular fluid motion rotating in the same direction as the earth. A tornado is a violently rotating column of air that is in contact with both the surface of the earth and a cumulonimbus cloud or, in rare cases, the base of a cumulus cloud.

Translation being Yuri aiming wildly at times leaving his feet in search of spectacular speedy knockout. Crawford fundamentally the better fighter can deliver a knockout blow that won’t as fast, but his feet will be in the correct position for both offense and defense.

I admit the metaphor is reach at best. I do think after a few slow rounds someone will take the lead as far as pressure and pace. If I were in Gamboa’s corner the game plan would be fairly simplified.

Gamboa’s left hook could be a key weapon on offense and countering on defense. Gamboa must start relatively fast in effort to get up on the scorecards. Putting rounds in the bank could make Terence Crawford press a bit early than he would want to.

Gamboa must be aggressive but not reckless, punching in combination instead of settling for potshots. Applying pressure behind his jab and lead left hooks will distract Crawford thus opening up holes for Gamboa to throw his potent right hand.

If he can close the gap it will increase his chances of catching Crawford in an exchange. If he is able to exchange it’s just a matter of time until a bomb is landed. The flip side of course is Gamboa’s bad habit of punching too wide resulting in a flash knockdown or worse with this type of opposition.

Crawford should stick to what got him to this point. Patient’s pays off with a guy like Gamboa, who rarely stays focused throughout a whole bout. Relying on his fundamentals and natural reach is the key to victory for Crawford.

Crawford is a natural fighter with the ability to switch from southpaw to orthodox without a hitch. He is responsible on defense yet still able to push forward on offense. He can counter from the outside and on the inside. Once Crawford has measured his opponents he throws a lot of power shots mainly his straight left or right depending on his stance.

Who will lead? My guess is they will take turns leading with majority of the battle taking place in the middle of the ring. It will be interesting to see if Crawford keeps his cool in front of his hometown during the slow moments.

Besides some exchanges and flurries on both sides I would be a tad bit surprised to see an abundance of action. I see Gamboa getting off early, at some point making mistakes, having to press late out of desperation after being controlled at range by Crawford.

If Gamboa can’t hurt Crawford in the first half it will be too little too late in the championship rounds. Crawford’s overall skill starting with defense and jab, to go along with a five inch reach will prove to be too much for Gamboa to overcome.

I don’t see a whitewash, rather two skilled boxers trying to outsmart each other with distance being a premium. My betting advice would be Crawford by UD and/or Gamboa by KO.

If Gamboa wins he will be stuck at 135 without a big name besides Mikey Garcia. The bigger names such as Lomachenko, Donaire, and Walters are at Featherweight. For Crawford, a win over Gamboa can be parlayed into the hotter division 5 pound north at junior welterweight.
My official prediction is Terrence Crawford by Unanimous Decision.

Written by Chris Carlson Owner and Host of Rope A Dope Radio at www.blogtalkradio.com/ropeadoperadio