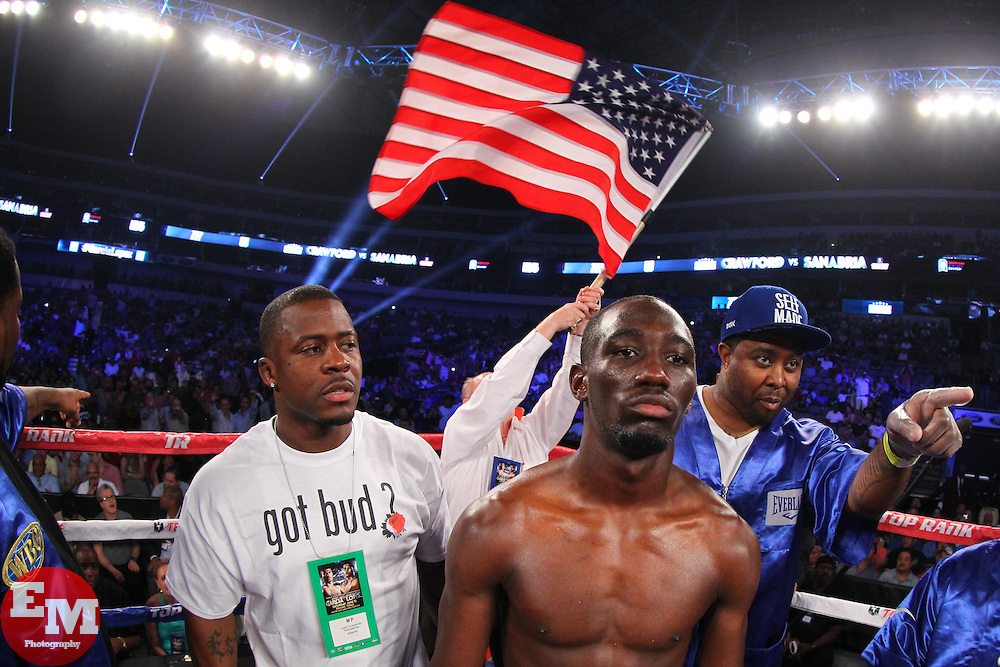 It was a packed crowd at the CenturyLink Center in Omaha, Nebraska Saturday night, most of them there to see hometown star Terence Crawford defend his WBO lightweight title against arguably his toughest and most high profile opponent of his career in Yuriorkis Gamboa.

It was a good night for those fans, for more than a few reasons, as they were treated to a fantastic fight between two incredibly skilled warriors in the main event of HBO’s Boxing After Dark.

The first round started off with Gamboa getting into a comfortable rhythm and dictating the fight’s pace. The hand speed of Gamboa was on full display and he was using his laser right hand behind a steady, albeit lackadaisical jab.

Gamboa continued to showcase his speed and was finding his distance, getting in and out of his opponent. But it was clear that Crawford was beginning to get settled in there and his speed was starting to showcase itself in the form of well-timed counter punching.

One side note that I noticed was the fact that Gamboa’s punching power didn’t seem to be as strong as it once did, at least not in comparison to his fights at the lower weight classes he had competed in throughout the majority of his career.

Gamboa wasn’t fighting a flawless fight by any means and was throwing some wildly open shots that left his chin exposed at times. Crawford continued to close the gap and in the 5th round Crawford landed a well-timed right hand that wobbled Gamboa, enough so that he wasn’t even able to clinch before eating the canvas.

Gamboa got off the canvas but continued to eat shots and was relieved to see the round end with his head still intact, just barley.

While Gamboa was never completely out of the fight, he was on the receiving end of some devastating shots delivered by Crawford. It may not have been as technical a fight as many were expecting, but there was some very clever boxing being demonstrated by both fighters. However, it was Crawford that was able to put it all together for longer and eventually separated himself from Gamboa.

In the 8th round, Crawford caught Gamboa with a counter right hand that sent Gamboa to the mat for the second time in the fight.

Gamboa appeared prime to for the picking, but instead he showed a warrior’s mentality and staged a very impressive rally in the 9th, catching Crawford on the chin, a punch that wobbled his knees. At this point, both men started throwing in a manner that resembled two brawlers going at it as opposed to the chess match they’re capable of producing.

Gamboa wasn’t being calculating enough, perhaps the desperation of a fighter that had been down twice was weighing on him, and Crawford took advantage by being tactically aggressive when he needed to be. That ultimately led to Crawford’s third knockdown of the fight as he sent Gamboa to the canvas with a devastating left hand.

With seconds left in the 9th, Crawford closed the show in impressive fashion — earning a spot on ESPN’s top 10 plays — by knocking Gamboa down for the fourth time in the fight with right uppercut which sent the Omaha crowd into a frenzy and led to the referee waving off the fight.

The 50-Cent promoted Gamboa said after the fight “There were just two warriors in the ring trying to get the victory, and he won.”

Most seem to believe the fight is a frontrunner for “Fight of the Year” and others are going as far as to say the 9th round is “Round of the Year” on top of it.

It was an incredible fight, a star making performance for Crawford who successfully defended his WBO crown. I can agree with most of the candor being dished out on social media, but I think Crawford’s performance was so spectacular that we may just have witnessed the makings of a star with even more to offer and perhaps this performance won’t seem as big in a few years and once Crawford really gets going.

For now, it is the biggest win of his career and he has proven that he is a legit force with a bright future.