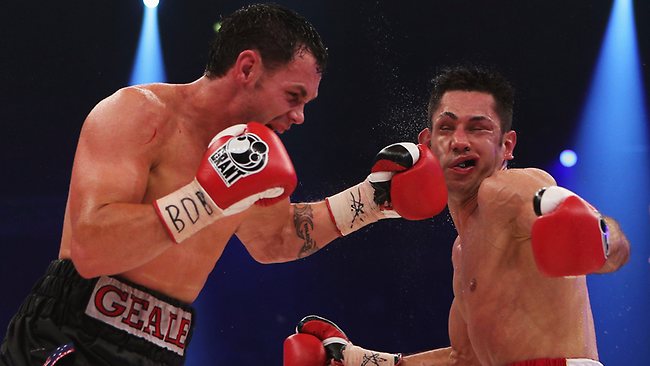 World champion boxer Daniel Geale (28-1, 15 KOs) will be presented with the Key to the Cityof Launceston at a public ceremony at the Town Hall tomorrow, November 17.

Launceston Mayor Albert van Zetten has extended an invitation to all Northern Tasmanians to attend the ceremony. The presentation will begin at 12.00 noon in the Brisbane Street Mall with a parade led by The City of Launceston RSL Band.

The parade will leave the Brisbane Street Mall and proceed north along St John Street to Civic Square, where the Key to the City will be presented on the Town Hall steps.  Geale will follow the parade in a vehicle provided by the Jackson Motor Company.

“The Key to the City is an honor which recognizes the contribution of individuals, groups or organisations, or outstanding achievements in sport, entertainment, and humanitarian work at a national or international level,” Mayor van Zetten said. “Daniel Geale has triumphed at an elite, international level, securing both the I.B.F. World Title and W.B.A. World Super champion title. I am hopeful that lots of people will turn out tomorrow to see the presentation to Daniel.”

“Its a great honor to be receiving such a prestigious award,” said Daniel Geale. “I’m humbled by the situation and I want to thank the people of Launceston and Mayor Albert van Zetten for all their support.  Come January 30th, when I step in the ring with Anthony Mundine, I’ll be fighting for the people of Launceston and all my fans around the world.”

“Daniel is a very special person inside and outside of the ring,” Promoter Gary Shaw stated. “He’s well deserving of this presentation and the residents of Launceston have a great champion to look up to.  Geale is the perfect role model for the sport of boxing and he should be recognized as such.  I’m happy for him and his family.”

Following the presentation Daniel will be in Civic Square ready to sign autographs and meet fans.