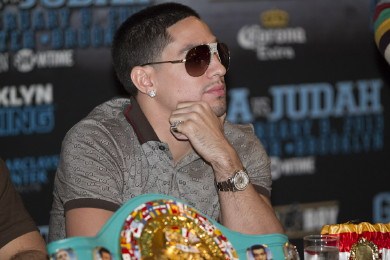 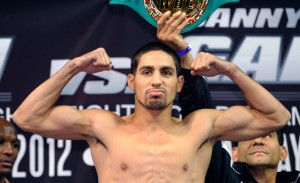 WBC and WBA Super World light-welterweight champion Danny ‘Swift’ Garcia (29-0, 17KO’s) recently took some time from his busy schedule to share his thoughts with Josh Grayfer of Thaboxingvoice.com. A range of topics currently headlining in the boxing world today was discussed.

They began with the inevitable. With rumors about Floyd Mayweather Jr opting out of the proposed fight with Manny Pacquiao right at the moment, Grayfer asked Garcia for his take on the subject. Will the fight happen?

“Ah, man if it happens it happens, if it don’t it don’t. At the end of the day I’m a fighter myself and it is what it is you know, it’s a business, I understand business so I respect whatever decision they make; either they fight or they don’t.”

Garcia probably finds this subject more tiresome than going twelve rounds with Lucas Matthysse, and his answer indicates as much. It also reveals how at the very top level of the game, some fighters aren’t plying their trade for the glory and the esteem they would receive from taking on the toughest assignments. To some, it is strictly business, and difficult to reconcile that kind of objectivity with the rabid lust most fans display when talking about a fight between Mayweather and Pacquiao. For the fighters and their representatives, it is perhaps easy to walk away from a deal like this… Even if it will provide an unsurpassable payday for both men- if something doesn’t add up on either side, but the consequence of this for the fans is that we are robbed of the greatest of spectacles. It is an unfortunate reality of the fight game.

Switching topics, Garcia confirmed that his next outing on April 11th against IBF World super-lightweight champion Lamont Peterson(33-2, 17KO’s) will be held in either Las Vegas or the Barclays Center in Brooklyn, New York. Though he jokingly added, he would rather the fight take place in his hometown of Philadephia.

This is a fight that has provoked some backlash for both Garcia and Peterson because it has been announced that the pair will only need to adhere to a catch weight limit of 143 pounds, meaning that not a single one of the three titles these men share between them will be at stake on the night. Why? I couldn’t tell you, but I’m sure we will be fed a litany of irrelevant reasons why this is the necessary circumstance in which this fight needs to take place. None of them will suffice. What should have been a unification fight, a huge deal that would escalate the winner’s reputation, is now just an interesting style match-up between two contemporaries. What a weak situation. And it makes Garcia’s next comments all the more perplexing.

Grayfer asked the champ if he was disappointed now the that negotiations to make a fight between Saul ‘Canelo’ Alvarez and Garcia’s fellow Puerto Rican (and WBC World middleweight champion) Miguel Cotto have been called off for reasons unknown. Garcia for his part seemed not the least bit surprised.

“I’m not sad I knew that wasn’t gon’ happen. Cotto gon’ fight Andy Lee in a unification fight, that’s what I’m thinking as a promoter, and then Canelo gon’ fight somebody else.”

The only upside, to choosing Andy Lee as an opponent in the stead of Canelo, is that Lee now holds the WBO middleweight title and a unification fight would be more significant than simply defending his belt against Canelo. Canelo would bring a bigger payday and bigger ratings for Cotto, so that would be the only way to go if Lee didn’t posses a version of a world title. So why wasn’t Garcia vs. Peterson made as a unification bout? That’s the biggest fight to be had in his division. Even if Garcia is struggling to make the weight these days like his camp keeps insisting, surely he could grit his teeth and make it one last time and cement his reputation as the 140 .lb. Kingpin of his day? I just don’t understand. There are forces at work here that a mere mortal like me, just can’t comprehend.

Garcia is one of the best fighters out there today. Ever since he decimated Amir Khan I have been watching him with appreciation and when he dismantled Lucas Matthysse I could only shake my head in admiration for his accomplishments. But it is recent occurrences such as this latest one with Peterson, and his much-ridiculed fight against the previously unheard-of Rod Salka last year that mean he is a target for criticism. Rightfully so, Danny Garcia has the lot to prove to fans after the easy-to-deem “Mismatch of the Year” against Salka.

Garcia for his part harbors no grudge and is benevolent in his attitude towards anyone who takes the time out of their day to take notice of him, and he had this to say regarding his so-called ‘haters’.

“Ah, I ain’t worried about hater’s man, if it wasn’t for haters I wouldn’t be me. You got people that love you; you got people that hate you. At the end of the day, if you watch and you pay attention, I salute you.”