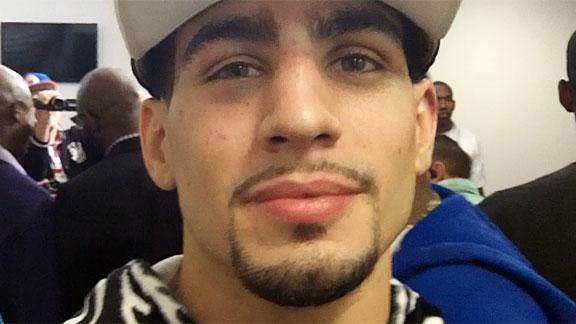 Last April, Danny Garcia was in a fight that defined his heart in the ring when he fought Zab Judah in a back and forth fight in which Garcia was cut, stunned and on the verge of losing for the first time in his professional career. Even though he had difficulties it was a learning experience for the young fighter.
“It was a close fight. I don’t think he won every round. There was couple of rounds that could of went either way. You can’t make it a close fight, there is a possibility that you might lose,” said Garcia.
Garcia’s next test comes against hard hitting Lucas Matthysse of Argentina in what is expected to be a high drama fight that will steal the show on “The One” pay per view.
What does Garcia do in a fight with Matthysse? Garcia believes that fighting smart is the key to beating his opponent and that he is in fact stronger than his opponent. ” Everybody else (who fought Matthysse) was scared,” said Garcia. “I’m not going to change my game plan and run around like a chicken without a head cuz I don’t run. I am going to be smart. I’m not going to give him nothing easy he is going to have to earn it. It doesn’t matter who is stronger because at the end of the day it is about being smart. He’s got power but I got power too. I’ve fought a lot of people with power. It takes more than power to win a fight.”
A victory over Matthysse would give Garcia a huge boost in his career and he feels would place him around the top of 140 pound fighters in history but Lucas does not deserve the credit he has already been given.” I feel after this fight I can be one of the best 140 pounders who have put on a pair of gloves. I don’t consider him one of the best because he never won a world title.”
Yes Lucas has never won a world title and to many fight fans the titles mean nothing because there are so many of them but to the fighters who actually fight for them it means something.
Is Lucas Matthysse all hype? Many fans would say that he is the real deal but Garcia see’s nothing special in his opponent.
“You have to hype the fighter to make the fight I understand that but he is just a regular fighter to me. I’ve seen a lot of strong fighters that knock people out when I was growing up watching TV. That just doesn’t win you fights. He already has two loses. He fought two people who hit him back and he lost. 30 were in Argentina. I would have been 30 and 0 with 30 knockouts.”