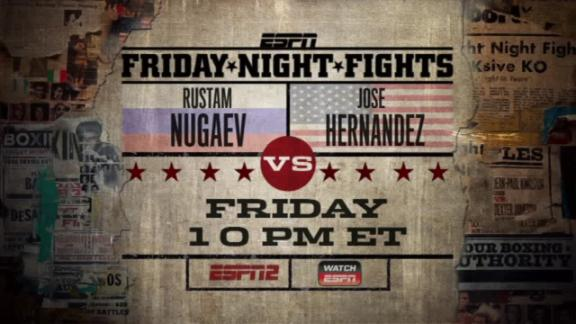 This Friday night from the Morongo Casino Resorts and Spa in Cabazon, CA; ESPN2’s Friday Night Fights is going in to high gear with two lightweight fights. In the 10 round main event Russian native Rustam “Mangust” Nagaev (24-6-1 14KO’s) takes on Texas brawler Jose “Loco” Hernandez (14-6-1 6KO’s), while in the co-feature rising prospect Jose “Sniper” Pedraza (13-0 9KO’s) squares off against spoiler Gabriel “The Ghost” Tolmajyan (14-2-1 3KO’s). With two crossroads fights on deck, the field is set to showcase some fireworks and move two fighters into each other’s paths.

Coming off a nearly two year layoff, Rustam Nagaev burst back on to the scene this year with a devastating eighth round knockout win over previously undefeated Jonathan Maicelo on FNF’s and a follow fourth round demolition of Daniel Attah. Looking to stay busy and now free of the ghosts that haunted his career years ago, Nagaev is hungrier than ever and will bring his boosted confident and KO streak with him Friday night.

Fondly known as “Loco” or crazy in Spanish, Jose Hernandez has had an up and down career but has always come back to prove wrong those who discredited him like he did in his last fight with an eighth round KO of undefeated Tony Luis this past January. For Hernandez this is truly his last call to pull off a win, falling short as he tried to step up to better opposition, this time he must build a winning streak to have the chance to get a title at what is an open division. Seeing how his last few fights have played out, Nagaev definitely has the edge, not only in power but in solid wins over solid opponents, he will have the same level of confidence and determination as Hernandez; the difference will be the tactics used to win. Having never been stopped and only touching the canvas once in his career, the tough Russian boxer has the edge in the “whiskers” category so look for him to throw caution to the wind against “Loco” who will pile on the punches to try and dent the oncoming tank.

Picking apart and embarrassing Pedraza’s country mate in his last fight, Tolmajyan wants to repeat his last win he had over undefeated Luis Maysonet Jr. in this 10 round junior lightweight battle. Going by the moniker “The Ghost”, Tolmajyan couldn’t be touched by the hard hitting Maysonet and was able to drop and hurt his foe various times throughout the bout turning him in to a true spoiler at 130lbs. Currently on a three win knockout streak, Jose “Sniper” Pedraza has his next victim in his sights as he continues to step up the competition as he did in his last fight, a seventh round TKO over Sergio Villanueva.

Looking to be one of the more versatile 130lb prospects out there, Pedraza has the power to stop his opponents but also the know how to avoid getting out boxed. Fighting against a light punching, yet technical fighter like Tolmajyan, Pedraza has to bring out his full arsenal against the smart Armenian if he plans on notching another victory under his belt and moving closer to taking over the spot soon to be left vacant by Miguel Cotto as Puerto Rico’s idol. Having been set up as an opponent last time out, it seems almost as if “The Ghost” favors being the underdog and should bring his best to the ring, if he can neutralize Pedraza’s power as he did in his previous bout, we could have another minor upset which would help the roles change for Tolmajyan.