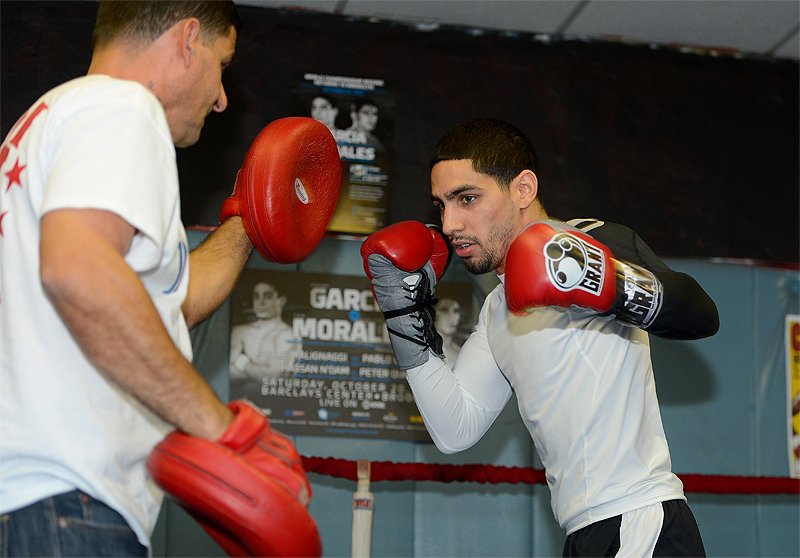 Unified Super Lightweight World Champion Danny Garcia (Right) and his father and trainer Angel Garcia (Left) pose on October 11, 2012 in Philadelphia during a media workout in preparation for his October 20, 2012 world title rematch against Erik Morales at the new Barclays Center in Brooklyn which will be televised live on SHOWTIME Championship Boxing. Photo credit: Rich Kane – Hoganphotos/Golden Boy Promotions

Unified Super Lightweight World Champion Danny Garcia (Right) hits the mitts help by his father and trainer Angel Garcia (Left) on October 11, 2012 in Philadelphia during a media workout in preparation for his October 20, 2012 world title rematch against Erik Morlaes at the new Barclays Center in Brooklyn which will be televised live on SHOWTIME Championship Boxing. Photo credit: Rich Kane – Hoganphotos/Golden Boy Promotions

“I think people are taking me more seriously now.  It took some time for everyone to realize how serious I am.  Then my last few fights showed them that I think and fight like a champion, which is what I am now.

“It is great to have a fight on the East Coast.  It is my comfort zone knowing that I will be able to fight in front of my fans, people from Philly and New York and especially all of the Puerto Ricans that are huge boxing fans and know my background and that I am fighting for them too.

“I feel so fortunate to have the opportunity to open Barclays Center in Brooklyn.  They haven’t had world championship boxing in Brooklyn for more than 80 years and it’s going to be a really special night for me and the rest of the fighters on the show.

“I can handle my success so far.  I try to see everything around me and pay attention to what is going on.  That helps me stay in the moment and appreciate what is right there in front of me.  I want to enjoy all of it.

“Erik Morales is a legend and in the first fight, I probably gave him more respect than I should have.  This time I am the champion and he is the challenger.

“That was my first big fight at such a high level and I learned a lot from it.  Morales definitely gave me a harder fight than Khan and also gave me a chance to fight for a title.  If anyone deserved a rematch, it’s Erik Morales for giving me the first chance.  That is boxing respect.

“My Dad and I have a great relationship.  I know he loves me and has my best interest at heart.  We believed when I started boxing at 10 years old that I could be a world champion and our dream came true.

“My Dad and I have a relationship without conflict.  He is my best friend and sure, we bump heads, but we always work it out.  We understand each other really well and that helps a lot.”

“Danny and I both dreamed of having him be a world champion.  It’s so hard to describe how it really feels for me and him.

“We have a partnership.  Sure I am his Dad and I love him like a son.  We used to watch fights together when he was about five years old and he would always imitate the fighters on television.  So when he was eight, I took him to the gym for a day and I left it alone and waited for him to show me he wanted to do it.  When he was 10, he asked if he could go back to the gym and then we started from there.

“It’s not about me.  It’s about Danny.  Sure I have an outgoing personality and what you see at the press conferences is just me saying how I feel.  It’s me showing my heart.  I am not trying to take the spotlight because it really is about him as a fighter and that’s me as his coach.

“I get him ready mentally, physically and spiritually and that is why he is going to be undefeated for a very long time.”