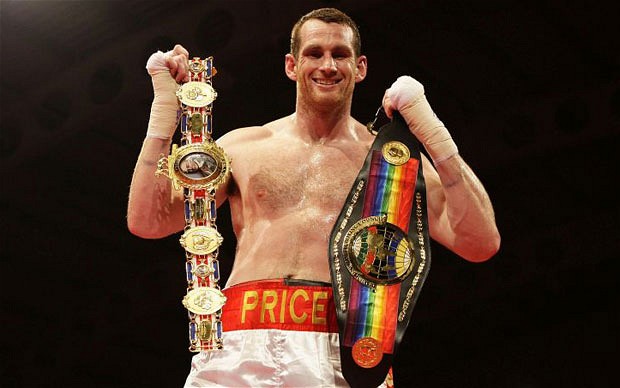 On Saturday night at Liverpool’s Echo Arena, Olympic Bronze medalist David Price, who many see as the rising star of the heavyweight division, will make the first defence of his British and Commonwealth titles against the Olympic gold medalist Audley Harrison in the Battle of the Olympians. Price, who is unbeaten thus far in his career, will take on the widely ridiculed Harrison, who knocked out Ali Adams in his last contest on May 26th after over 18 months out of the ring. Come Saturday, if Price is as good as he’s being made out to be, we should witness a massacre- but this is a potential banana skin.

Price of course, is coming off an impressive victory over Sam Sexton, also in May, and seems to be developing in each fight he has. His boxing ability and extreme power has seen him shoot up to the top of the British heavyweight scene, and he looks ready to step up another level. Although Harrison will provide a small step up in class, Price should wipe the floor with ‘A Force’.

I should make it clear that I’m not a fan of Audley Harrison, but I’ll try to judge this fight fairly. Let’s look at Harrison’s ‘qualities’. He’s a big heavyweight, he can sometimes land a lucky shot (his left hand),and he has a big mouth; which helps him sell fights and makes a lot of money in the process. He’s above the likes of Ali Adams and John McDermott on the domestic scene, but in terms of boxing ability, I wouldn’t place him much higher than Sam Sexton, who Price has already beat.

After all, Sexton beat part time taxi driver Martin Rogan twice, whilst Rogan beat Harrison in their bout back in 2008. He is of a decent domestic level – he fits in with the likes of Danny Williams, Matt Skelton, and Michael Sprott. He’s nothing special, and that has shown with how he has struggled in the professional game so far.

But, the reason this is a small step up in class for Price, is because Harrison has mixed it at a higher level, he has some attributes to match those of Price in terms of size, and he carries a name. Most boxing fans and even none boxing fans will know who Harrison is because of the fact he claimed Olympic Gold in the 2000 Sydney Olympic Games, so if Price can do a job on him, he will add a name to his CV. Harrison is a big heavyweight, so we’ll see if Price’s power can take him out. But when I say that, Harrison has been taken out before, so if Price is the real deal, he should get Harrison out of there.

I’m clutching at straws trying to find reasons why this is going to be a competitive fight. If I’m being totally honest though, it will be brutally one sided. Price is superior in ALL departments, he picks some lovely shots, has a terrific jab and his power is phenomenal. If he doesn’t knock out Harrison, then he’s not as good as we’ve been making him out to be.

But as I say it’s a potential banana skin, because the one question against Price is his chin, and Harrison has showed a degree of power in the past with the left hand he landed against Michael Sprott to win the European title. If Harrison lands that shot and knocks Price out, which is a distinct possibility, Price will lose all credibility and he will be ridiculed for losing to a fighter who is widely disliked in Britain.

But, as far as I’m concerned, that was a once in a lifetime shot Harrison landed against Sprott, he promised us he would knock David Haye out with the very same punch, and he failed miserably, by throwing it once in the fight against the Hayemaker and completely missing with it. You never know, but I can’t see Harrison landing his left hand decisively on Saturday.

As I said, Harrison will provide a test Price hasn’t faced before, but Price will have too much, and hopefully end Harrison’s career in the process. Harrison will end up as a journeyman if he carries on thinking he can win a world title (which he still believes he can), so let’s hope he retires after this fight.

So the question is, how quickly will Price get Harrison out of there? Harrison has said his usual party piece about how he’s in great shape and how he’s hungry for redemption, but we’ve heard it all before and I don’t see the fight going past the middle rounds. I think around the seventh, Harrison won’t be able to take the power anymore. He may make it awkward for Price in the opening few rounds, but eventually, Harrison will fall.

If Price can get Harrison out of there earlier than David Haye did back in November 2010, then he will send out a message, and fans will call for a fight with British rival Tyson Fury even more than they already are. Fury isn’t fighting the best opposition at the moment; in fact, his last fight with Vinny Maddalone was a shocking match up, despite how much Fury’s promoters wanted to build Maddalone up as a ‘C’ level world class fighter. The fight we all want to see is Price vs. Fury, so hopefully, a convincing win over Harrison will push that fight one step closer. But until then, let’s just hope we get the entertainment we’ve rarely had from Harrison come Saturday, and Britain’s rising star in Price doesn’t slip up.