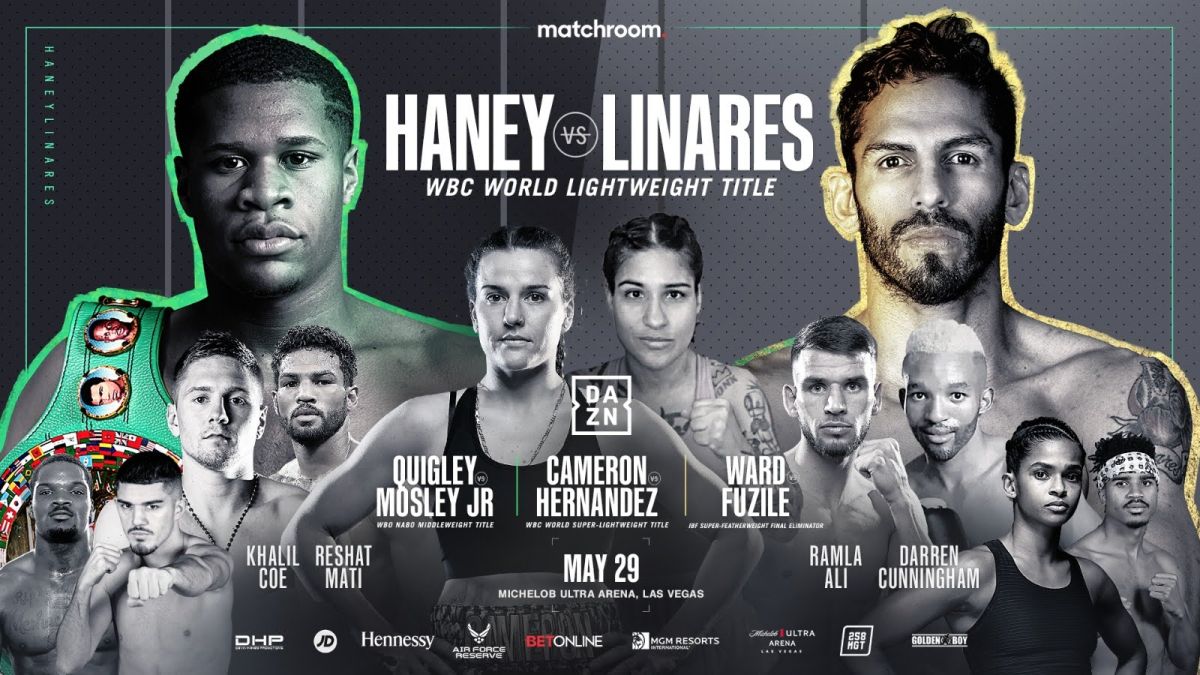 Coming into tonight’s fight between Devin Haney and Jorge Linares Haney was the heavy favorite. Did he perform like the favorite? Yes and no. Haney did great in scoring points but he did not really hurt or stop the “chinny ” Jorge Linares.

Haney’s speed was the key factor in this fight and he could not put Linares down at all. Linares hurt Haney badly a few times late in the fight. Am I shitting on Haney for what happened? No…he needed this type of adversity to move on. Haney won but it was not almost so.

A fight with Teofimo Lopez should be next. Lopez says he wants it to be made and Haney says he is all for it.

“I want to make the biggest fights happen and if he wants to make it happen lets do it.”

Now all Lopez has to do is get past George Kambosos.

The co-main event was a mismatch from all angles. The size and power of Chantelle Cameron was too much for Melissa Hernandez but the way the fight ended…well it sucked. Hernandez was getting beat soundly but after a punch that did not do any damage, the referee steps in to end the fight.

Jason Quigley and Shane Mosley Jr. had a hell of a fight and it was razor tight. The fight could have gone either way but Mosley seemed to slow down late in the fight while Quigley stepped on the gas.

Azinga Funile shocked the world when he took on and stopped Martin Joseph Ward. The fight started off slow and but it did not take long for the two to pick up the pace. Ward was dropped early in a flash knockdown but after hurting his leg/knee late in the fight he got pummeled and knocked down again. He wanted to continue but his corner threw in the towel to stop the damage taken by Ward.

Khalil Coe had a successful debut against an overmatched Nathaniel Tadd. Coe worked the body well and and was patient and it took a little just over a round to get the job done.

Round 1: Linares lands a left hook upstairs early. Haney goes after the body early. The check hook is working well for Linares in this round. Both fighters land hooks towards the end of the round. Haney’s speed has been the factor this round.

Round 2: Haney lands a three punch combination early on. Linares gets caught with a lead uppercut. Linares is getting marked up early in the fight. Haney is almost landing at will now and things are getting heated between the two. Linares lands a one-two but they seem to have little to no effect on Haney.

Round 3: Haney lands an overhand right and makes Linares miss with almost every shot that is thrown with bad intentions. Haney looking to utilize the uppercut; he’s already landed a couple. Linares lands a left hook but he is not doing nearly enough to win rounds.

Round 4: Linares catches Haney early with a left hook. Haney working the jab mostly for the first half of the round. Linares wobbled by a counter left hand in the clinch. Haney lands 4 straight jabs and Linares comes back with a straight right. Haney lands a left hook and the two trade to end the round.

Round 6: Haney putting his power into his shots this round. Linares really taking on damage. Linares lands a hard left hook and then connects with a hard right hand. Best punches landed by Linares this entire fight.

Round 8: Haney almost rips Linares head off with a left hook. Seems to be a bit of urgency from Linares. The two trade body punches and several rabbit punches.

Round 9: Haney opens the round with a hook. The two trade in the middle of the ring Linares lands a hard left uppercut and Haney’s knees buckle. Towards the end of the round the two traded several heavy blows but Linares seems to have landed the better shots in those late exchanges.

Round 10: Slow round but it heated up in the second half. The two had heated exchanges but Haney was wobbled hard at the end of the round.

Round 11: Haney still hurt this round. Haney gets wobbled in round 11 and holds on. The referee is not doing anything about the excessive holding at this point. Haney lands a lead left uppercut. Haney gets hurt towards the end of the round and complains to the ref. Haney tries to grab on and Linares pushes him down to the ground to end the round.

Round 12: Haney looking to hold early on. Haney lands a low blow and Linares gets a warning for punching behind the head. Linares gets caught with a hook but Linares fires back. Linares land the right again and Haney continues to hold.

Chantelle Cameron vs Melissa Hernandez Round 1: size advantage for Cameron right away and she lands a couple rights right away. Every shot Cameron lands is heavy and things aren’t looking good for Hernandez early.

Round 2: Hernandez lands a couple left hooks early but they had no effect.  Cameron effective with the one-two. Hernandez had a better round but the size difference is way against her.

Round 3: Hernandez knocked off balance from a combination.   Hernandez throws a flurry but gets stopped in her tracks with a straight right.

Round 4: Hernandez looks defeated before coming out for the next round. Hernandez lands a couple counter lefts but gets sent down for her troubles. Cameron goes on the attack to try and end the fight but Hernandez makes it to the end of the round.

Round 5: Hernandez had a better round this round but the referee steps in and stops the fight after Hernandez takes a right hand.  The crowd shows their disapproval immediately.

Result: Cameron wins via TKO at 1:38 of the fifth round.

Round 1: Mosley working the jab well in the opening round. Quigley getting marked up early.

Round 2: The two exchange hooks. Mosley still working the jab well. Mosley lands a hard right to the body from close range.

Round 4: The two begin to go toe to toe a bit more early in the round  but nothing significant lands and it doesn’t last long. Quigley snaps Mosley’s heD back with a jab. Mosley lands a counter left hook and then a right that gets Quigley to ride his bicycle for a few seconds.

Round 5: Mosley coming out strong. The two exchange  throughout the round but Mosley seems to be getting the best of it.

Round 6: Mosley slowing down this round.  Quigley lands a combination but Mosley comes back.  Quigley shoe shines Mosley to the body. Lands a right hand and left hook.

Round 8: Mosley swinging wildly and missing early on. Mosley lands an overhand right  Quigley lands a right to the body and a left hook upstairs. Quigley landing the better shots and slowly starting to pull away I’m a close fight.

Round 9:  Missed a majority of this round my tablet rebooted as the round began.

Round 10: Fight is tight going into the final round.  Both fighters come out throwing bombs. Mosley lands a hard right to the body and Quigley lands a hard counter right. Quigley landing the better shots but Mosley comes back  landing bombs. More lands a counter overhand right in the last 30 seconds and the two trade for the last 13 seconds of the round and we go to the scorecards.

Round 1: Ward corners Fuzile early but fails to land anything significant.  Fans begin to boo early on. Very little action this round.

Round 2: Ward tries to press the action early. Fuzile lands a shot to the body that bothers Ward. Fuzile lands a counter Teo punch combo but Ward comes back with his own combo seconds later

Round 3: Ward smothers Fuzile against the ropes but nothing significant lands.  Ward lands a counter right towards the end of the round which may have been the most significant punch of the fight.

Round 5: Ward applying pressure with combinations early.  Ward sends Fuzile back after landing a couple counter shots. Fuzile lands a few counter body shots with one shot going low. Ward gets rocked with a counter late in the round.

Round 6: Ward lands a lead right early one. Ward hurt by a big counter left and Fuzile comes alive

Round 7: Fuzile lands a hard left early on and Ward comes back with a straight right. Ward’s leg is shot and he goes down hard from a right hook. Wards wants to continue but his corner throws in the towel.

Result: Fuzile wins by TKO 2:45 of the seventh round.

Khalil Coe vs Nathaniel Tadd
Round 1: The two fighters come out swinging. Tadd hurt in the first minute in a half from a body shot and eventually goes down. Coe continues to target the body and Tadd goes down from a body shot again but makes it out of the round.

Round 2: Coe goes straight to the body and snaps Tadd’s head back with a jab. Coe lands a three punch combo to the body that brings Tadd down to a knee and he does not get back up.

Result: TKO victory 1:10 of second round for Coe
Attachments area