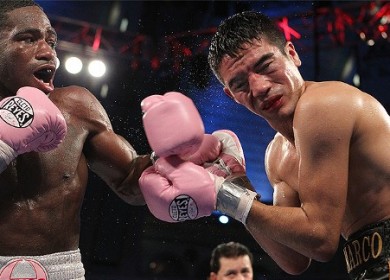 Adrien Broner stormed his way onto the lightweight scene this past Saturday with an impressive beat down of Antonio DeMarco. Along the way, he lifted the WBC strap from DeMarco when he stopped him in the 8th round. As soon as the fight ended, the questions arose, who would be next and at what weight?

With certain top lightweights like Miguel Vasquez and Mercito Gesta fighting next month on the Manny Pacquiao-Juan Manuel Marquez undercard and with both fighters either signed or tied to Top Rank Promotions; that almost certainly rules them out as possible lightweight opponents. Golden Boy (Broner’s promoter) has no real quality lightweight at this moment for Broner to feast on.

Then there’s an opponent who jumped up in weight when Broner was his mandatory at 130 in Ricky Burns. Burns at 135 has another alphabet strap and would seemingly be the most ideal for Broner at this moment if he wants to keep his momentum going.

“There’s more big fights, Ricky Burns is one, he’s got a real big following, we can make a big fight in Vegas or anywhere over here, we’re not going over there. But we’re not in a hurry to jump. This isn’t frogger; we’re not going to rush to jump across the street,” Broner told ThaBoxingVoice.com

With the backing of HBO, Golden Boy Promotions, and super advisor/manager Al Haymon, Broner is right. He doesn’t need to go over there (United Kingdom) to make a fight with Ricky Burns. Burns in turn does have a good following across the pond but a unification bout with Broner will almost certainly be his most lucrative and as we know, the UK faithful will travel to support their guy.

However, should that not come about; Team Broner has a watchful eye on the Manny Pacquiao-Juan Manuel Marquez fight.  According to Broner, “We’re not in a rush, time is on our side. There are still plenty of big fights out there for us. Manny Pacquiao and Juan Manuel Marquez are going to fight. Marquez can still make 135, so we’re going to see what happens with that fight. But for the most part we are going to go to the drawing board with Al Haymon and Golden boy Promotions and see what the best option is.”

Marquez who is seemingly working on a fight by fight deal with Top Rank might be available to work with Golden Boy after his fight with Pacquiao should he lose. Should he win, would fans want to see version 5 of Manny Pacquiao-Juan Manuel Marquez? There is also the question of weight and whether Marquez can fight at 135 since his last fight  at lightweight was 2 years ago.

Marquez in turn has also not wanted to play the part of stepping stone when names like Amir Khan and Robert Guerrero were mentioned as possible opponents for Marquez in the past. But should Marquez want to continue fighting should he lose to Pacquiao, there isn’t a hotter name and higher profile fight available for Marquez than Broner.

Golden Boy Promotions Oscar De La Hoya concurs, “Marquez would be a great fight for Broner. Broner’s not going to duck nobody, not dodge anybody. He’s going to go after the best. Just like all the best fighters in the sport have said, if you want to be the best, you got to beat the best. Marquez is a legend; Marquez is one of the pound for pound best out there. A fight with Marquez and Broner would be huge. But it would be not be a problem, let me tell you for Broner.”