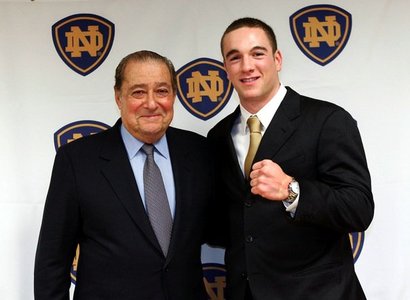 Boxers don’t have it easy.  They work out intensely twice a day for weeks on end, only to enter the ring and get punched in the face and ribs for a half hour in exchange for a paycheck and the chance at glory.

There’s a promotional formula in the sport of boxing that factors in a boxer’s skill level, “fan-friendliness,” and overall marketability.  A good looking Red-headed Mexican boxer with a catchy nickname and a freight train for a left hook for example, will always pay better than a not-so-good-looking Eastern European technician with a name that’s difficult to pronounce.

Light Heavyweight contender Mike Lee is a relative newcomer to the world of professional boxing, having turned pro just 30 months ago.  In that short time he has fought on the undercards of Manny Pacquiao, Miguel Cotto, Kelly Pavlik, and Brandon Rios.  All are cards that received major network attention, even though his own fights may not have made it on the air.  It’s great to be on Bob Arum’s good side.

Oh, by the way, he is also a Subway spokesperson and has been twice featured in USA Today and once each in GQ Magazine and The Chicago Tribune.

Promoters often take gambles on fighters when a brand can be created around a fighter’s look, background, or personal story.  The networks will follow suit since an emotional connection to a personality begets loyalty, which begets ratings.

There’s a lot to like about Lee’s story and, therefore, a lot of money to be made by sharing it.  A Chicago native and ex-football player and Notre Dame Alum, Lee turned down lucrative careers in the finance world to pursue his dream of become a prize fighter.

Over the last two years, he has racked up an undefeated record and is building a strong personal brand for himself in and out of the ring.  You can see him becoming a color commentator on NBC Sports Network just as easily as you can see him with a title belt around his waist.

If it was up to Lee, however, he will rather make a name for himself by trading leather in the squared circle than by selling sandwiches, even though I’m sure the money’s not that bad for the latter.  Just ask Michael Phelps and that Jared guy.

On December 15th, Lee will be entering the ring against a cherry-picked opponent (currently listed as TBA) that will probably make him look good and further increase his stock value.

While fight fans clamor to have him thrown in with the wolves, Trainer Ronnie Shields has stated that he wants to take his time with Lee and groom him slowly.  Lee fought in intramural leagues and in the novice ranks of the Chicago Golden Gloves but “coming up in boxing” and a lengthy amateur background is invaluable in a sport that takes years to master.

Regardless of the length of his career trajectory, Lee already has a fan base that many pro boxers with 10 additional years of experience would kill to have.  Wearing blue and gold and chanting his name they fly to Vegas and drive to Texas to support him with unwavering dedication.

Mike Lee the boxer and Mike Lee the brand are growing slowly as Shields and Arum carefully engineer the perfect path for his expected climb to the top.  Right now, he’s a bright and rising star in sky of countless dim ones.