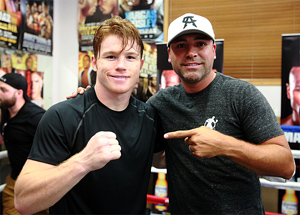 Saul “Canelo” Alvarez is clearly the future of big time boxing. The Mexican superstar has already cemented himself as a top draw within the sport, and with Floyd Mayweather Jr. and Manny Pacquiao on their way out of the sport, Canelo is in position as the youngest of the cash cows with the weight of boxing relevancy on his shoulders.

We could have a less desirable option to represent boxing’s biggest stage in the coming years, and while Canelo might not be the “pound for pound” technical expert that kingpin Mayweather is, he has proven that he is willing to take on the toughest challenges.

If you ask an unbiased fight fan about the most significant issue facing boxing’s biggest stage they will say that the lack of competitiveness in Mayweather main events and his choice of opponents over the years is a key factor in his overall appeal and the overall appeal of boxing as a whole.
With Canelo at the helm, he could change the very nature of big time boxing by taking on the most worthy challengers, despite their mainstream appeal.

And if you believe Oscar De La Hoya, then that could very well be the case in Canelo’s next fight.
“Canelo is looking to fight in May of next year, so nothing is being negotiated now, we’re several months away. We’re looking to see who he’s going to fight, so hopefully we can start that very soon. Canelo is telling me he wants to fight ‘GGG,’ he wants to fight whoever’s out there. [Canelo also wants] Miguel Cotto obviously, which is probably the fight to make,” De La Hoya told Thaboxingvoice.com’s Josh Grayfer.

Canelo fighting Gennady “GGG” Golovkin would be a very significant fight to say the least, especially if he did so while passing on Cotto – a fight De La Hoya has deemed the biggest fight in boxing today, surpassing Mayweather-Pacquiao.

Canelo passing up on a huge money fight, an obvious hot PPV ticket, a box-office smash, and a shot at the lineal middleweight crown in favor of a fight with arguably the most dangerous fighter in all of boxing would be borderline heroic in this era of boxing.

Anyone that has followed boxing knows that the likelihood of a fighter choosing the Golovkin route and what it represents is highly doubtful, and maybe it is. For Oscar to make claims or even insinuate the possibility of Canelo fighting Golovkin in his next fight isn’t all that curious, even if Golden Boy has no plans on making that fight next.

For De La Hoya (and Golden Boy) it is all about keeping Canelo’s name relevant. Canelo was supposed to close out the year with one last fight in December against Joshua Clottey before a huge fight in May of next year. But that fight isn’t going to happen because of a supposed injury Canelo suffered. That means Canelo will go ten months between fights. That is a significant layoff, but not so significant from a performance standpoint, at least not for a young fighter that has stayed busy like Canelo. Plus, if Canelo does end up fighting Cotto then they will share a similar layoff in terms of time – Canelo last fought in July and Cotto in June.

The drawback with the layoff is most felt from a public relations standpoint. De La Hoya will entice people with his Golovkin claims.
He could also be trying to stack the chips on his side of the negotiating table when he faces off against Arum in the coming months to secure the Cotto fight. Publicly announcing that Canelo is considering “GGG” is a not so subtle way of saying he has options and doesn’t necessarily have to fight Cotto in May.

De La Hoya could be trying to bring down Cotto’s price while driving the split closer to Canelo’s favor. This tactic may work with a lesser seasoned
boxing promoter, but not Arum.

The fact that De La Hoya would attempt this knowing that it won’t work on a guy like Arum could mean that he isn’t trying to insinuate anything and it may not be a tactic at all. I would be surprised if there were any truth to this, but there is irrefutable evidence and past precedent that makes the chances of a Canelo-Golovkin fight not so outrageous.

Canelo has stepped up to the plate a few times before, he has fought the fights that nobody thought he’d fight. First, a fight with Austin Trout at a time when Trout’s status was at an all-time high coming off a winning effort against Cotto. Many considered this fight the best in the division and felt like Canelo was biting off more than he could chew with Trout.

Then, Canelo fought Mayweather Jr. The risk/reward wasn’t nearly as high because the reward was as big as it gets and the risk wasn’t too heavy, either. The risk of losing was evident, but Canelo wouldn’t take a pounding against the smaller Mayweather and a loss wouldn’t hurt his career, after all no one had cracked the Mayweather code and no one probably ever will (at least no one he’ll fight).

The biggest piece of precedent came in Canelo’s last fight against Erislandy Lara back in July. Fans and media alike all though that Canelo would avoid Lara at all costs and Lara’s reputation continued to grow as the second best tactician behind only Mayweather himself. However, Canelo did the unexpected in boxing, he fought the opponent with the highest risk and lowest reward.

De La Hoya can make any claims he wants, but it has nothing to do with Canelo’s fearless attitude because the truth is the risk attached to any particular fighter will never be great enough for Canelo to risk the reputation of a “ducker” or a “cherry picker.”

The likelihood of this fight coming to fruition boils down to strategic planning. I believe Canelo will fight Golovkin, but not next, just like he fought Lara, but not before he fought Mayweather. He won’t risk losing a fight with Golovkin before cashing in on a fight with Cotto. That doesn’t make him scared, it makes him normal. The Golovkin fight will be there waiting for Canelo whether he wins the Cotto fight or not, but a Canelo loss hurts a Cotto promotion, at least some.

I don’t doubt Canelo’s desire to fight Golovkin, in fact I can envision him fighting Golovkin before any of the other desirable matchups come to fruition. If you look at Andre Ward’s current position, Peter Quillin’s current status, Sergio Martinez’s vulnerable state, and Chavez Jr.’s already missed opportunity then you start to believe that Canelo may tackle the monster before any of the other “good boys.”
Oscar feels the same way.

“Canelo wants to fight him (Golovkin). Canelo is not afraid of nobody, he’s a guy who wants to go up against the very best. Canelo is a fighter who, just like myself, just like Hopkins, he’s willing to take the risk.”