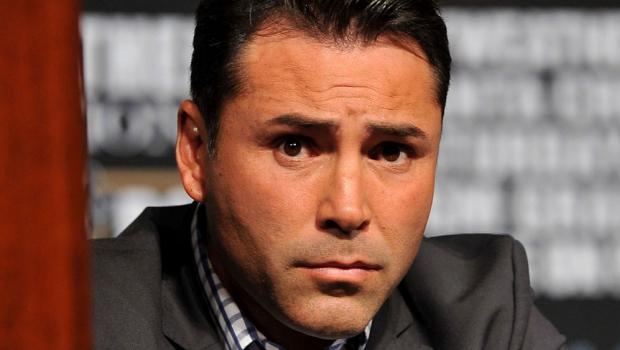 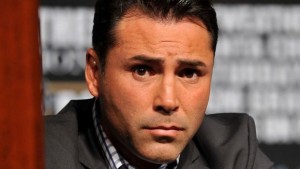 Times, they are changing. 2015 marks the first year in almost a decade where a marquee fighter has presumed to fight on Cinco de Mayo weekend without going up against Floyd Mayweather Jr. This particular weekend commemorates Mexican independence, so it is only fitting that the man trying to encroach on Mayweather’s territory is Mexican himself.

Saul ‘Canelo’ Alvarez (44-1, 31 KOs) and his promoter Oscar De La Hoya, along with WBC Middleweight Champion Miguel Cotto (39-4, 32 KOs) and his promoter Bob Arum are conspiring to steal away the sacred date by organizing a fight between themselves, capitalizing on the national rivalry between Canelo’s Mexico and Cotto’s Puerto Rico.

Elie Seckbach, in a video for EsNewsReporting.com spoke with Oscar (the founder and head of Golden Boy Promotions) along with a table-full of other reporters concerning how close this proposed clash is to being made. Oscar revealed his current mindset when asked what Canelo needs to do to beat Cotto in the ring, by bypassing the question entirely to accentuate the fact that he and his team are not the ones delaying this deal.

“Look, with Canelo-Cotto our side is done. We want the fight, Canelo wants the fight so you know, it’s now up to Cotto, it’s now up to Todd Duboef and Gaby his lawyer and hopefully we can make that fight happen.”

A voice other than Seckbach’s then queried what exactly is Cotto unhappy with, given that Canelo is seemingly ready to go, having accepted all terms.

“I don’t know. Cotto is Cotto we have to respect that. He’s a guy who will fight anybody. He’s right at the peak of his career coming off a great win with Martinez. This fight here if it gets made is second to Pacquiao and Mayweather and is the best fight the fans can watch. It can attract the casual fan and it can attract women also. You know with Canelo-Cottto, Puerto Rico-Mexico, it has the ingredients to be a huge, huge fight.”

Oscar himself was renowned for attracting the female audience to his fights. It was one of the reasons he was so successful. The girls screamed for him along with most of the men but there was also an undercurrent of resentment from some towards his pretty-boy image, and it all combined to create a huge following for him in his heyday at the turn of the century. Oscar understands the importance of roping in as many people as possible.

Following this, another reporter inquired as to whether a neutral site for the bout had been agreed upon, one where neither fighter is perceived to be the favorite. Oscar immediately began to mention Las Vegas before being reminded that Canelo probably feels more at home there than Cotto, having fought there in five of his last six appearances. So he began again with a different tact.

“I think that both guys understand that look, whatever makes sense you know? I think that this event belongs in a huge arena with 100,000 people. You can go to Dallas, San Antonio, and maybe I’ll speak to Bob and build a 50,000 outdoor arena[laughs].”

Incidentally, both of the locations mentioned would probably favor Canelo more than Las Vegas seeing as they are in Texas, the young Mexican’s home away from home. You can’t blame him for trying to make a case for his man practically fighting on home turf under the guise of wanting a big arena for the event. He went on to reiterate that from his side of the bargaining table, everything was kosher.

“When I say our side is done, I mean we’ve agreed to all the terms that were talked about. A site was talked about and the reality is, you can probably make the argument that Las Vegas is probably Canelo’s territory and Texas. And you go to New York and it’s Cotto, but the fact of the matter is wherever we can stage the biggest event[is where it will happen]. That’s the bottom line, so the great thing is that it’s not priority, it doesn’t really matter where the fight is staged. They just want to fight.”

Again Oscar shows his shrewdness. He knows the biggest arenas available are in Texas, and the most prestigious are in Las Vegas. He knows how strong the support for Cotto in New York is and that all suitable sites on the east coast do not match up to those in the west and the south in terms of capacity.

Judging from what was said, where the fight will be held seems to be a major sticking point. If I was Cotto I would be thinking I’m the one with the green belt, I’m the four-weight world champion, I’ve had the bigger fights over a more prolonged period. I wouldn’t be going out of New York to defend my belt either. Let the Canelo travel and take the belt if he wants it. I could be completely misjudging the situation. Nobody has all the information apart from the fighters and their teams, so we all will have to be patient.

As an interesting side piece, Oscar was asked what he would do if he managed to secure the services of super middleweight champion Andre Ward. Ward has been away from the ring for over a year now as a result of some bizarre legal difficulties with his own promotional team and it is unclear when he will rejoin the ranks of active boxers. This period of inactivity is the latest of a series of absences caused mainly by a troublesome shoulder injury he claims to have been carrying most of his career.

“What a talent he is, boy. Here you have an all-American, clean-cut [athlete], this guy should be another ’Sugar’ Ray Leonard. I don’t understand his current contract situation but you can’t get that time back, especially as a fighter. He’s gotta fight man. It’s a shame.”